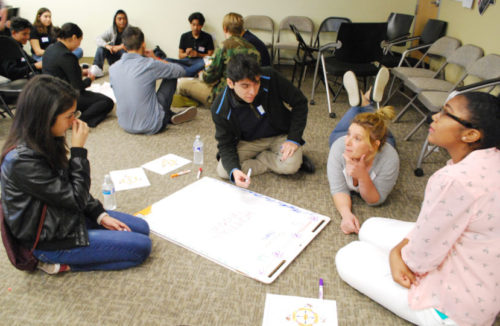 Youth Council teens, a new civic engagement organization, broke into groups with deputy public defenders to discuss the strengths of various leadership types, and to identify their own styles.

They kicked off the effort on a recent weekend, meeting with program leaders and young attorney advisors to develop and prepare for those tasks.

“They are a team of civically engaged and socially conscious young people armed with the knowledge that their efforts can effect positive change in their schools and their community,” said Public Defender Randy Mize. “I am 100 percent behind promoting and supporting San Diego youth in this purposeful endeavor.”

The first of two projects the student council will tackle, will be voter pre-registration of youth, said Connie Howard, of the Public Defender’s Office. The students will go to their schools and organize a rally or event where they can pre-register 16- and 17-year-olds to vote immediately upon turning 18. Additionally, the students will also go out into the community and register adults to vote over two weekends in April, Howard said.

The program is part of the Public Defender’s commitment to safe communities, which includes creating an environment where youth are less likely to get in trouble while promoting authentic youth-adult partnerships. Howard said in creating the council, “we can make a long-term commitment to including the youth voice in selecting strategies that will respond directly to their goals, priorities and needs.”

The students applied for the positions and were selected from among 60 candidates after interviewing with the Public Defender’s Office staff. The Youth Council requires a serious commitment from the students. They have all agreed to the initial two-day training to outline the tasks, develop goals and organize into committees. The council will meet for two hours every other Sunday to manage the results for projects, and are expected to provide extra time for special projects.

Nina Salameh, a 10th grader at San Diego High School, said she is excited to be part of the council. She added that the voting registration project in particular sounds interesting to her because “a big part about democracy especially is voting, and if people don’t come out to vote, then we don’t have the basis of our country.”

“I really just wanted to be in an organization that made a huge impact on the community because I’m in a lot of clubs, but I haven’t really seen a lasting impact made on the places around me and that’s kind of what I want to do,” said Salameh.

Gabby Ortega, a ninth grader who attends Monarch High School, said she was interested in the Youth Council because she wants to help the community in some way, and she also knows it will look good on her college applications when the time comes.

Beyond that, she hopes it will help her overcome her shyness and grow as a young student leader.

She said at the first meeting, the youth were still discovering each other’s strengths and leadership abilities, choosing a direction for their project and learning how to work as a team. After the voter registration project, they will work together to develop a second project focused on social justice.

“It’s really uplifting to be part of something that is proactive and to be working with youth that are motivated and engaged,” said Audrey Kyu, one of several deputy public defenders working with the Youth Council.