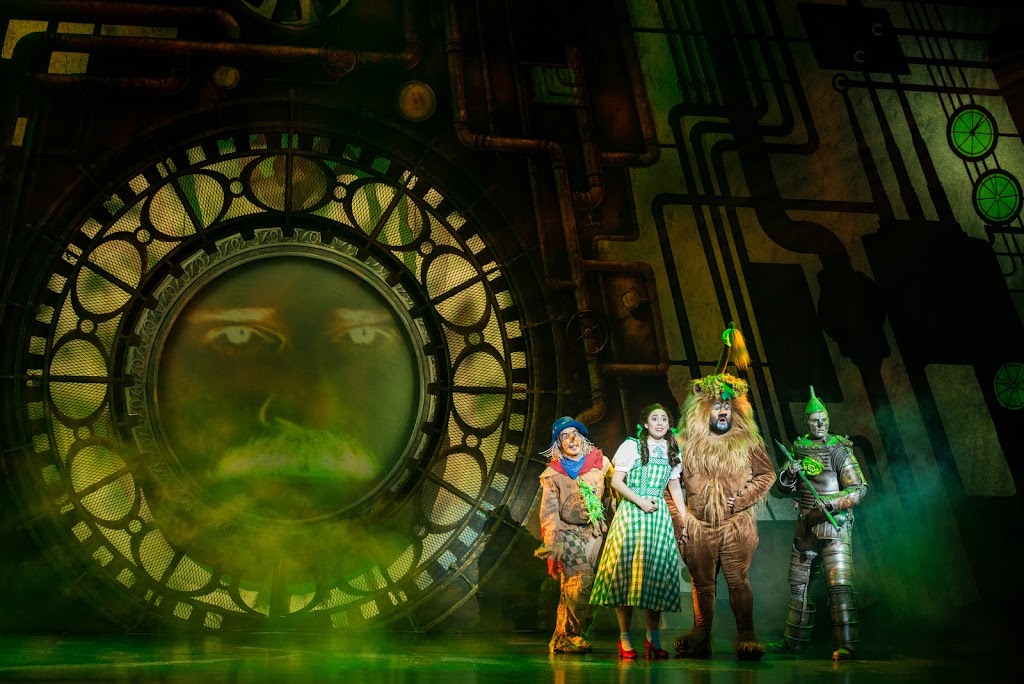 Mark A. Harmon as The Wizard, Morgan Reynolds as Scarecrow, Sarah Lasko as

SAN DIEGO–Click your heels together and join Scarecrow, Tin Man, Lion, Dorothy and her little dog Toto, as they journey through the magical land of Oz to meet the Wizard and obtain their hearts’ desires.

Broadway/San Diego brings the North American tour of the new stage adaptation of “The Wizard of Oz” at the San Diego Civic Theatre from March 15 to 20.

“The Wizard of Oz” is an enchanting adaptation of the all-time classic. Developed from the ever popular MGM screenplay, this new production contains the beloved Harold Arlen and E.Y. Harburg songs from the Oscar-winning movie score, all the favorite characters and iconic moments, plus a few surprises along the way, including new songs by Tim Rice and Andrew Lloyd Webber.

“The Wizard of Oz” had its world premiere at The London Palladium Theatre in March of 2011.  After a successful West End run, the production had its North American premiere in Toronto in December of 2012, and then embarked on a U.S. tour beginning in September of 2013.

Starring as Dorothy is Sarah Lasko. A University of Maryland graduate, Lasko most recently appeared at Maryland’s Imagination Stage, where she originated the role of Lisa in Double Trouble, the musical adaptation of The Parent Trap. She appeared at the Kennedy Center as a soloist in “An Evening with Barbara Cook” and in “NSO Christmas Pops with Marvin Hamlisch.”

Mark A. Harmon will star as Professor Marvel/The Wizard. Harmon was seen in the national tours of Mamma Mia! (Harry Bright) and Hairspray (Wilbur Turnblad). He received a Carbonell Award nomination for Best Actor in a Musical for A Little Night Music (Broward Stage Door Theatre).  Shani Hadjian will star as the Wicked Witch of the West. Hadjian appeared in the national tour of NETworks Presents Disney’s Beauty and the Beast (Madame de la Grande Bouche) and Fancy Nancy (Mom).

Also starring in the production are Aaron Fried as Lion, Jay McGill as Tin Man, Morgan Reynolds as Scarecrow and Rachel Womble as Glinda.

San Diego Civic Theatre is located at 3rd and B Street in San Diego.