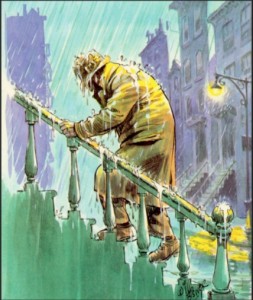 SAN DIEGO–Legendary comic book master Will Eisner’s groundbreaking graphic novel “A Contract with God” is being adapted into a live action feature film, it was announced this evening at Comic- Con International 2010 by the film’s producers.  In what is considered by many to be one of the most influential graphic novels ever written, in “A Contract with God” Eisner utilizes the comic book format in an innovative and pioneering way to explore stories and memories from his childhood growing up in a New York City tenement. Each tale captures the brutality, fragility, and tenderness that exists among people living in close quarters in challenging economic times.

A quartet of acclaimed independent directors are attached to direct each of the graphic novel’s four adjoining chapters: Alex Rivera (“Sleep Dealer”); Tze Chun (“Children of Invention”); Barry Jenkins (“Medicine for Melancholy”); and Sean Baker (“Prince of Broadway,” MTV’s “Warren the Ape”).  The film will be produced and adapted for the screen by Darren Dean, whose first feature “Prince of Broadway,” about an illegal immigrant in contemporary New York City, is being released this fall and whose second feature, Rwanda-shot “Kinyarwanda” (directed by Alrick Brown) is in post-production, due for a festival bow in 2011.

The film adaptation of “A Contract with God” will be produced under the auspices of the Eisner estate in the spirit of the original work.  Bob Schreck, a 30-year veteran of the comic book industry and Michael Ruggiero, former head of original programming at STARZ, will serve as Co-Executive Producers.  Black Squirrel Films Co-Founder Tommy Oliver will serve as Co-Producer and Mark Rabinowitz, Co-Founder of indieWIRE.com, will serve as Associate Producer.

Focusing on the immigrant struggle,  “A Contract With God” takes a look at a salient theme across four separate but related stories, set primarily in a New York City tenement in the 1930s.  The four segments are: “A Contract With God” (Rivera), “The Street Singer” (Chun), “The Super” (Jenkins) and  “Cookalien,” (Baker). Each of the filmmakers comes to the project with a distinct aesthetic approach which will capture the diversity, style and essence of Eisner’s story. Nat Sanders (“Medicine for Melancholy,” “Humpday”) will serve as editor on the entire film.

The announcement regarding the film adaptation of “A Contract with God” was made Friday evening at the 22nd annual Will Eisner Comic Industry Awards, which honors creative achievement in American comic books including induction ceremonies into the comics industry Hall of Fame, the first time such an announcement has been made at the Eisners. Will Eisner was a regular participant in the award ceremony until his death in 2005.

Darren Dean said, “I look forward to finding the fine balance of offering Eisner fans a very faithful interpretation of his work and allowing the voices of these strong and competent filmmakers to be heard. We are all approaching the inaugural stage of this project with respect, honor and anticipation and hope that the fans will welcome us with both faith and scrutiny. This is for them, as much as any of us.”

Bob Schreck said, “Getting to know Will Eisner was one of the great honors of both my personal and professional journeys. We are all well aware that the work ahead has a very high bar of excellence to aspire to set by Mr. Eisner’s pioneering achievements in storytelling.”

Tze Chun said, “Before I became a filmmaker, I wanted to be a comic book artist, and I spent many nights poring over Eisner’s Comics & Sequential Art.  The book should be mandatory reading for every person who wants to be a storyteller regardless of their intended medium.  Eisner’s magnum opus, “A Contract With God,” is a master class in visual storytelling –groundbreaking, humanistic, moving, and rich in detail.  Within these four short stories, Eisner creates an entire world.  I’m very excited to be a part of the team that will bring this film to life.”

Key roles will be cast in the coming months with principle photography set to begin in 2011.