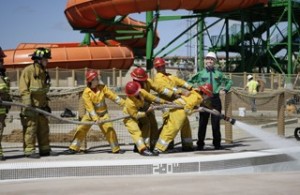 The two fire “crews” created a bucket brigade across the Build-A-Raft River, where kids will be able to customize their own raft made of soft LEGO® bricks before floating down the lazy river. The local heroes from the Carlsbad Fire Department helped steady the flow of water shooting from the fire hose into Kid Creek, a lazy river built with younger kids in mind in the DUPLO® Splash Safari section of the world’s first LEGO themed Water Park.

When the bucket brigade completed the water fill, they were given a sneak peek of some of LEGOLAND Water Park’s other exciting elements including more than 20 jumbo LEGO models who splash or spray water on guests; Orange Rush, a family tube slide where up to four people can ride together down a 312-foot long curving track on an 11-foot in diameter half pipe; Twin Chasers, two side-by-side enclosed red tube slides that stretch nearly 130 feet, Splash Out, an open body slide that invites guests to slide 240 feet and “splash out” into the water below; and Joker Soaker, a fun interactive platform in the wade pool where kids can aim water cannons at each other as a LEGO jester model tells jokes and pours 350 gallons of water down upon them.