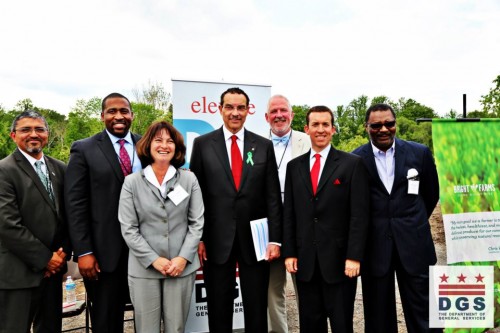 WASHINGTON–(PRWeb)–Washington, D.C. Mayor Vincent Gray launched a partnership with BrightFarms to build a 100,000 square-foot, state-of-the art greenhouse farm in Ward 8 designed to grow up to one million pounds of local produce per year.

The greenhouse farm project – which also has the potential to create jobs for District residents – showcases the city’s position as a leader in sustainability and fresh-food initiatives.

“This greenhouse farm project is consistent with our Sustainable DC food goals,” said Mayor Gray, who in 2011 announced a plan to make D.C. the greenest, healthiest, and most livable city in the nation. “This project not only adds 2-1/2 acres of food-cultivating land within the District, but it helps put the city on the path to ensuring universal access to secure, nutritious and affordable food supplies.”

Among a host of other initiatives, Sustainable DC seeks to dramatically expand food production and access to healthy food within the city. The location of the farm, at the corner of South Capitol Street and Southern Avenue in Ward 8, has been underutilized and plagued by illegal dumping.

“Ward 8 has been a food desert for far too long,” said Ward 8 Councilmember Marion Barry. “This farm will not only provide a healthy food option for our constituents, but the greenhouse will also provide jobs, economic stimulus and greater access to fresh produce for residents citywide.”

By growing locally, BrightFarms delivers produce that is thousands of miles fresher, more flavorful and better for the community. This farm will:

“Using District land for this hydroponic greenhouse is emblematic of our commitment to the Mayor’s Sustainable DC goals.” said DGS Director Brian J. Hanlon. “We have a responsibility to the City and to future generations to be more intentional about prioritizing agricultural land use and healthy food access in urban environments.” Echoing Director Hanlon’s sentiments, DGS Sustainability Manager Mark Chambers said, “Locally sourcing our food is just one part of the challenge. It is equally critical we explain clearly and thoughtfully why this type of project is necessary to meet our needs as a species.”

“When it comes to sustainability, D.C. is a real player with an impressive long-term plan,” said BrightFarms CEO Paul Lightfoot. “The DGS, acting on behalf of Mayor Gray, has been a tremendous and extremely efficient partner. We cannot wait to bring millions of pounds of the freshest local produce to an innovative retailer in the nation’s capital!”

The groundbreaking for the greenhouse farm construction project is set for fall 2013, with completion in early 2014. A local partner on the BrightFarms project is the Anacostia Economic Development Corporation (AEDC).

“The Anacostia Economic Development Corporation is pleased to be in partnership with BrightFarms to provide quality, healthy and GMO-free vegetables to the residents of the District of Columbia,” said Stan Jackson, CEO of AEDC. “We are equally excited to create jobs for our residents that will pay a livable wage in recognition of our diversifying economy.”