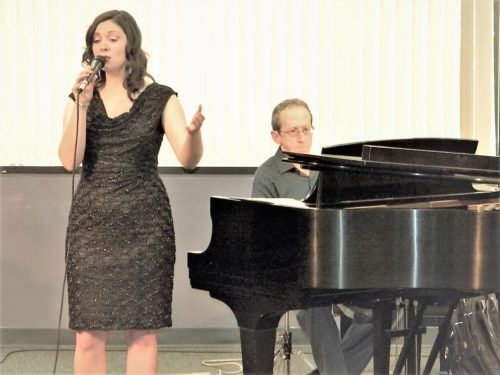 WASHINGTON, DC – Alyssa Allgood, a Chicago based jazz vocalist won First Place in the finals competition of the First Annual Ella Fitzgerald Vocal Competition, held on April 29, 2017, on the campus of George Washington University. The competition was part of the worldwide celebration of the 100th birthday of the late Ms. Ella Fitzgerald, born on April 25, 1917.

The singing competition was sponsored by the Blues Alley Jazz Society and the Ella Fitzgerald Charitable Foundation, with an emphasis on discovering and providing exposure for the next generation of jazz vocalists who can exemplify the discipline and vocal excellence personified by the first African American woman to win a GRAMMY, and the best interpreter of The American Songbook, The First Lady of Song – Ms. Ella Fitzgerald.

Four other finalists in the competition who have roots in the DC area and the east coast included: Second Place Winner – Danielle Wertz, who is from Falls Church, VA. She holds a B.S. Degree in Jazz Vocal Performance from the University of Miami’s Frost School of Music. Wertz was named one of the eleven semi-finalists in the 2015 Thelonious Monk International Jazz Vocals Competition, and placed third in the 2017 Mid-Atlantic Jazz Vocal Competition. She is a 2015 DownBeat Student Music Award recipient and was named the inaugural winner of the 2012 Washington Women in Jazz Festival Young Artist Competition.

There were three Third Place Winners: Alex Hamburger is a young vocalist, flute, and bari-sax player from the DC area, studying in the Music Conservatory at SUNY Purchase in New York as a James Moody Scholar. Hamburger has shared the stage with such artists as Paul Carr, Gary Bartz, Javon Jackson, Warren Wolf, Dick Smith and many more. Lorin Kayla is a 17 year-old senior at Woodrow Wilson High School in DC where she is an active participant in the vocal and theater arts program. Nicole Roberts is a recent graduate of the Music Business program at Berklee College of Music in Boston, MA. She has performed in numerous of chorales and vocal choirs, and is currently works as a freelance music business consultant and is part of the vocal section in a Boston based group, Greenline X-Tension.

The First Annual Ella Fitzgerald Vocal Competition judges consisted of Darden Purcell, LaTonya Wrenn, and Connaitre Miller. Alison Crockett was also a judge (leading up to the finals), but she was busy at the time of the finals conducting her jazz choir from George Washington University, which was invited to perform at the Blues Alley Big Band Jam, which was taking place simultaneously on the National Mall on the Saturday afternoon of April 29. 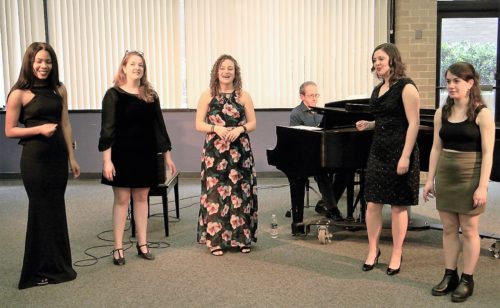 Alyssa Allgood is recognized as an artist who “impressively sing, scats and writes original lyrics” (DownBeat Magazine). She sang the classic “I Am Beginning To See The Light,” which is a popular song and jazz standard, written by Duke Ellington, Don George, Johnny Hodges, and Harry James, and published in 1944. Ms. Ella Fitzgerald and The Ink Spots featuring Bill Kenny recorded a version in 1945, which was on the pop song hits list for six weeks in 1945, reaching #5. Allgood’s interpretation had her voice staying close to the original melody, and her intonation was joyful and beautifully measured. When you hear this voice, you know that you are listening to a true professional who is making the rounds on her musical journey.

It is obvious that her range varies, but her tone, depth, phrasing, and drop-dead manner proves why she was the top lady in the house. Allgood’s singing style edges close to a cool cocktail jazz, sultry and smooth, speaking tremendously of a 1950s, 1960s upscale bar where men wear three piece suits and women are awash in satin, with a lusciously sultry vocalist half seen through cigarette smoke. And the vocalist is Allgood. The perfect midnight music.

According to Allgood’s press release, “she has a strong affinity for hard bop music and her voice perfectly bridges this style with a more modern approach, evident on her debut album, Out Of the Blue. Released in fall 2016, this album reimagines the classic Blue Note Records era with original arrangements and lyrics. The album received wide critical acclaim and was hailed as a ‘Best Release of 2016’ by The Huffington Post, All About Jazz, Jazz History Online, The L.A. Jazz Scene and a ‘Best Debut Release of 2016’ by The New York City Jazz Record.”

Based on her performance in this competition, Allgood’s accomplished scat and vocalese singing was quite impressive. Expect to hear great things about this remarkable artist in the future.