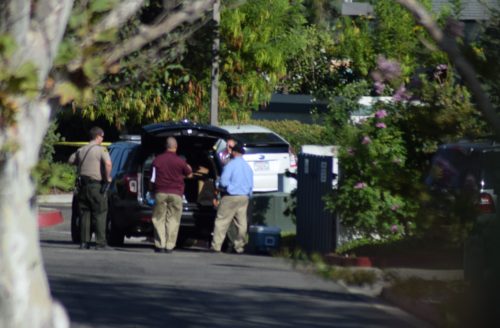 Detectives from the Sheriff’s Homicide Detail and the Vista Sheriff’s Station at the scene of the officer-involved shooting in Vista. Photo: Gina Yarbrough/San Diego County News

Two deputies on patrol in Vista saw a black Lexus traveling near the intersection of North Santa Fe Avenue and Knapp Drive. Deputies recognized the driver of the Lexus as a known gang member who currently had an active felony warrant for his arrest. Deputies also knew the arrest warrant stemmed from a February 2015 incident in the city in which the suspect was involved in a lengthy SWAT standoff. When he was eventually taken into custody, he was found to be in possession of multiple illegal firearms, holsters and ballistic vests.

Deputies attempted to stop the man but he refused, instead leading the deputies on an eight minute pursuit through Vista. The pursuit ended when the man’s vehicle collided with a rock berm inside the townhome complex in the 100 block of Bronze Way. The man ran from the vehicle and deputies followed. The man ran through a narrow walkway between the homes located in the Bronze Way complex. At some point along the narrow walkway, the man and deputies became involved in a confrontation. During that confrontation, two deputies fired multiple rounds, striking the man several times. Deputies were able to take him into custody, provide first aid and call for paramedics. When he was taken into custody, he was in possession of multiple knives and several rounds of shotgun ammunition.

He was transported to a local hospital where he is in critical condition.

The incident is being investigated by detectives from the Sheriff’s Homicide Detail and the Vista Sheriff’s Station.