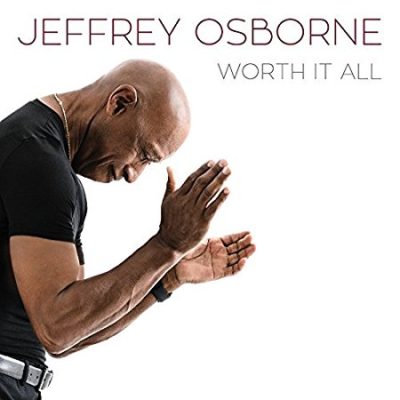 LOS ANGELES–For his first album in 13 years in the realm of Soul Music for which he has so indelibly inscribed his mark, singer/songwriter/producer Jeffrey Osborne is making a most triumphant return via his 12-song album, Worth It All.

Artistry Music’s Worth It All is a vibrant and thoughtfully romantic project in which Osborne, 70 reflects on his 35-plus years of marriage and sets said thoughts to a richly robust and diversified palate of sumptuous soul music. The album features special guests Gerald Albright on saxophone, Rick Braun on trumpet and includes a sexy, rainy night scenario song entitled “Work It,” co-written by son, Jeffrey Osborne Jr.

While the album is dotted with delights ranging from edgy up-tempos such as “Let a Brotha Know,” “Just Can’t Stand It” and “Stay the Way You Are” as well as signature ballads such as “The Greatest Night” and “Your Lover” – all written by Osborne. The centerpiece of the album is its tutorial title track, “Worth it All,” a song that speaks to the challenges of weathering the storms of a long-term relationship to reach the sweeter rewards once the clouds have been chased away. Sung to electric piano accompaniment only, this is an instant classic that compels all who hear it to stop whatever they are doing and listen. “I believe people actually become closer working through trials and tribulations,” Jeffrey muses. “It’s about communication and not allowing that fire to slip away. Love is worth going through the little fires you have to put out from time to time.”

Jeffrey Osborne has proven a master at longevity through a career that began as lead singer of the band L.T.D. with which he recorded the `70s Soul classics “Love Ballad,” “(Every Time I Turn Around) Back in Love Again,” “Holding On (When Love is Gone),” “We Both Deserve Each Other’s Love” and “Shine On.” Going solo in the `80s, Osborne soared anew with enduring gemstones such as “I Really Don’t Need No Light” “On the Wings of Love,” “Stay With Me Tonight,” “We’re Going All The Way,” “Love Power” (a duet with Dionne Warwick), “You Should Be Mine (The Woo Woo Song)” [his biggest solo pop charter) and “Only Human,” and earned four Grammy Award nominations as a solo artist. Jeffrey was also the lyricist of the Whitney Houston classic “All at Once.”

Now following on the heels of his 2013 Jazz album, A Time for Love (the final production of the late, great George Duke), Osborne remains as vital as ever.

A strict vegan and in the best shape of his life, Jeffrey still performs over 100 shows a year with three generations of fans, with contemporary singers such as Trey Songs, Rick Ross and Young Buck having sampled his work.

“Worth it All, is also a double entendre meaning it was worth it all for me to do my first R&B album in thirteen years,” Jeffrey concludes. “I still believe that there’s an audience for what my generation has to offer. As artists, we must maintain the integrity of our music.”