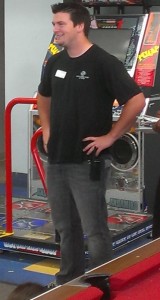 VISTA—A local youth was named California State Youth of the Year at a Boys and Girls Club ceremony honoring its members.

More than 300 guests attended the club’s ceremony that was held at the Sofitel Hotel in Redwood City. Boys and Girls Club alumna Lucille O’Neal, mother of Shaquille O’Neal, led the event.

The Youth of the Year is the highest honor a Boys and Girls Club member can receive. As the organization’s premier youth recognition program, Youth of the Year recognizes outstanding contributions to a member’s family, school, community and Boys and Girls Club, as well as overcoming personal challenges and obstacles. The program encourages club members to reach their full potential by achieving academic success, leading healthy lifestyles and contributing to their communities.

Growing up was not easy for Wilson. Both parents were drug addicts who ended up in prison. Luckily, Wilson was adopted by a loving family.

“He is a testament to the impact that a caring mentor and Boys and Girls Clubs make in the lives of kids especially those kids that need a club the most.  We are so proud that Russell was recognized for his exceptional character, servant leadership and outstanding achievements” said Matt Koumaras, Executive Director of the Boys and Girls Club of Vista.