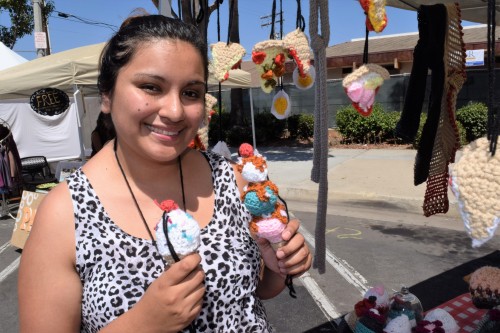 VISTA–It was a day full of art and music at the second annual Vista Art Foundation’s Alley Art Festival in downtown Vista.

Organizers described the event as a “celebration of creativity found off the beaten path.”

“This wasn’t your normal art walk. It inspired young, old and even the in between. It allowed anyone to be creative with many of the interactive art experiences,” said Jonathan Cuyno, executive director of Vista Village Business Association.

Cuyno says the event is open to all artists in North County who want to showcase their creativity to the public. 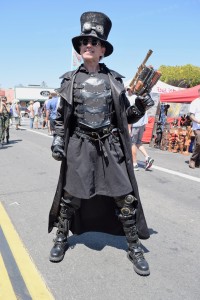 “The festival was created for all artists. It is to give artists a voice. Not just paintings or sculptures as we may first think. But an expression of a culture of ideas, thoughts and actions. There were opportunities for anyone to get lost in a way rarely seen in an art festival,” Cuyno says.

Horacio Daniel Hernandez, project manager of the Alley Art Festival, describes the festival as unique to the North County region.

“In my opinion, this festival is unique because of our variety of art being shown,” Hernandez said. “We had a film festival, poetry slam, theater, many local and famous entertainers on two stages, installation of art for two years in row, and had many non profit as well as local business involved in making this a success.”

Rows of vendor booths on Main Street were selling everything from photography, paintings to arts and crafts. A local artist was seen painting an interactive mural on a wall while sounds of music from local rock bands and musicians blasted in the background.

Cartoonist and actor, Dean LeCrone was one of hundreds of vendors participating in the art festival. This is LeCrone’s second appearance at the event.

“This is not my first time participating. I was in the first one last year. I had my own booth and provided my superhero caricatures to the public,” said LeCrone, who came dressed in his Steampunk character, “Dr. Peepers.” “This year, Maureen Barrack, the head of the festival, asked if i would participate and appear as my Steampunk character “Dr.Peepers.” She wanted me to be in the Alley Art Festival parade. Plus, Artbeat on Main Street Gallery asked if I would like to offer my super hero caricatures at their booth to help promote them.”

Plans are in the works for the next Alley Art Festival.