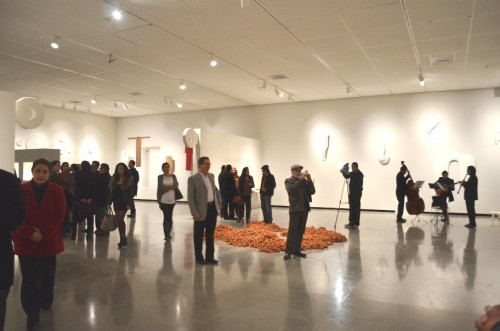 Tijuana, B. C.–San Diego Mayor Bob Filner was one of many visitors in Tijuana recently to visit the final exhibition of “Matter of Desire” (Materia del deseo) in the Tijuana Cultural Center.

The exhibition has been on display since August 1, 2012, in Hall 1 at the Cube building.

Wolski led the final tour of the exhibit, and recalled how he devoted part of his short stay at this border city to create a piece titled “The Border.”

“After getting to know Tijuana I identified with its character of being a border city. A border linked to movements. Not just any city, she lives in the tragedy, hope, limitation and suffering,” said Wolski.

Wolski described his work as a “media type,” a finished reflection from various fields of contemporary life in situations such as the economic, political and religious.

The work by Wolski has important implications as it has created its own aesthetic. All were born from clay, drawings and stone with each object now being a symbolic reference of what inspired him. Between each of them are woven similar stories, although they are told in different ways.

“Matter of Desire” was on display from August 19 through Sunday February 24 with a recorded number of 10,783 visitors.