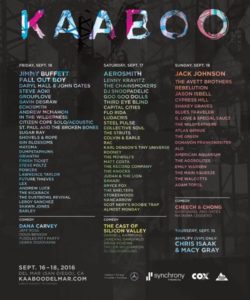 SAN DIEGO–KAABOO Del Mar, the ‘Mix-Perience’ of a lifetime, unveiled Virgin Produced as the Official Content Partner through 2018.

The three-day event will feature a curated collection of world-class music, hilarious comedy, gourmet cuisine, craft libations, inspiring contemporary art and personal indulgences, from September 16 to 18 in Del Mar. For the first time, the film and television development, packaging and production company of Sir Richard Branson’s Virgin Group will also be there to capture the event’s contagious spirit of surprise, delight and discovery.

Last summer, Jason Felts, CEO of Virgin Produced, gathered a select group of friends, family, business partners and celebrity influencers to join him for the ultimate weekend escape at KAABOO.

“This partnership is a great opportunity for us to join a like-minded, incredible experience that brings multiple generations of people together,” explains Jason Felts. “There is something for everyone, from kids to parents, grand-parents or business partners, and it provides the opportunity to come together in a music festival event that is relevant to all of us.”

As a partner this year, KAABOO will experience the industry’s respect for the Virgin brand, as it fosters awareness and excitement for the event among the stars. As a part of the 2016 experience, Virgin Produced will be joined by celebrities, talent and other industry professionals, including an exclusive group of actors and musicians. With excitement building over the KAABOO partnership, its unique timing in September, and its proximity to Los Angeles, Hollywood is expected to be in attendance and become loyal guests at future KAABOO events.

Following KAABOO Del Mar 2016, Virgin Produced will create the official experience video, highlighting the best moments from the 3-day event, including behind the scenes action, sneak peeks at never before seen content and exclusive artist interviews. This video will capture the entire, uncommonly imaginative experience of the KAABOO Del Mar event.

Bryan Gordon, founder and CEO of KAABOO Del Mar, is excited about the partnership.

“Having a leading-edge creative and production collaborating with us is going to really fun and bring the experience to the next level,” Gordon says. “Not only will we capture high quality content at this one-of-a-kind event, but we’ll also be able to share it through Virgin’s remarkable world-wide distribution channels.”

“KAABOO Del Mar is breaking the mold of what a festival is, and could be, and we are excited to be part of the team behind it,” said Jason Felts. “Being the creative producer of this incredible content allows Virgin Produced to deliver content our loyal brand fans expect. We’re excited for our ongoing partnership with KAABOO.”

Starting after the event, exclusive KAABOO Del Mar content will also be available to guests onboard Virgin branded aircrafts and hotels across the United States. Available on the Virgin Produced channel on Virgin flights, the KAABOO footage will be packed with fresh content that is only available onboard and gives a sneak peek of the all-out ingenuity that will unfold come September.

Three-day passes are on sale now and can be purchased through KAABOODelMar.com/passes. For more information, including the full music lineup, visit the www.KAABOODelMar.com.