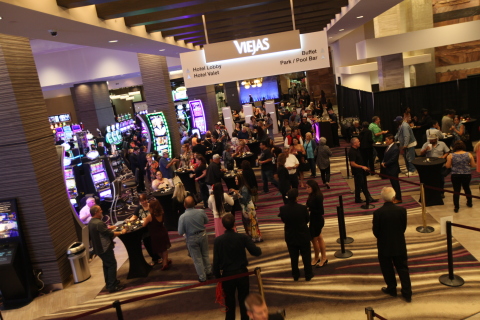 SAN DIEGO–(Business Wire)–Viejas Casino and Resort Friday officially opened the newly expanded section of their gaming floor, including the addition of 1,000 all new slot machines.

The 15,000 square foot expansion includes a new state-of-the-art promotion stage and open access to an ultramodern escalator bank that leads to their new hotel tower, opening later this month.

“This marks the first step in our most ambitious plan of growth to date,” said Viejas Tribal Chairman Robert Welch. “The ongoing development of Viejas continues to resonate in many positive ways for the San Diego area, both economically and in establishing a strong foundation for the future of our culture.”

Thousands of guests were in attendance for the opening of the expanded casino. VIP guests were treated to a preview earlier in the evening, which included entertainment and complimentary hors d’oeuvres. On October 30, the central feature of the year-long development culminates with the grand opening of Viejas’ second luxury hotel tower. The event will commence with a ribbon cutting ceremony, which features a thrilling tightrope performance by Tino Wallenda of the world-famous Flying Wallendas. The new hotel tower will then be opened for guest tours.

Regarding the opening of the casino expansion, General Manager Chris Kelley stated, “This enhancement of Viejas Casino is the result of the hard work and commitment of hundreds of team members and skilled workers, dedicated to producing an outstanding experience for all of our guests.”

Since the opening of their first hotel tower in 2013, Viejas Casino and Resort has been awarded AAA Four Diamond status consistently every year.