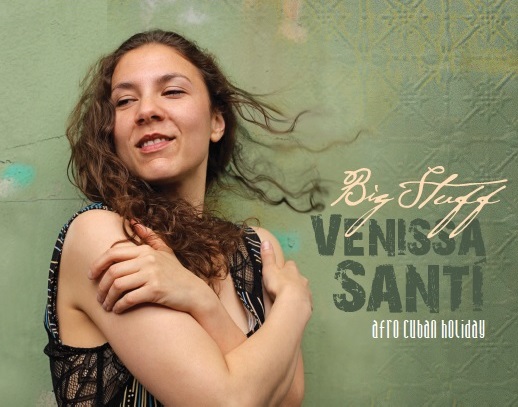 LOS ANGELES – Philadelphia native and Cuban American jazz composer, vocalist, and song stylist Venissa Santi took a chance on her upcoming September 10, 2013 12-tracks Big Stuff: Afro-Cuban Holiday CD, the brilliantly innovative follow-up to her 2009 Sunnyside Records debut, Bienvenida. Big Stuff: Afro-Cuban Holiday is a tribute to the legendary blues/jazz icon, Billie Holiday; and any singer who attempts to reinterpret her original songs can either have success or colossal failure; however, in this CD, Venissa Santi managed to successfully lend her polished and graceful vocals to Holiday’s materials and transformed such classic hits as What’s New, That Old Devil Called Love, and You Better Go Now, with a certain dramatic power to connect emotionally with the songs and the listener.

35-year-old Santi at first hearing could easily be mistaken for jazz singer Esperanza Spalding in the way she phrases certain lyrics, but let there be no doubts and with all respects to Spalding – Santi ain’t no Spalding sound alike clone.

Santi has a distinctive edge by using her Afro-Cuban roots and measured and intense vocal training as a constant source of fulfillment, rejuvenation, and improvisation which was met in many ways throughout this CD; these gift comes from her abilities to use melodic decoration which is evident in her honey-tongued version of You’re My Thrill and Stormy Weather, yet simplification of the melodic lines is what connects the listener to the songs, which was a Billie Holiday trademark technique.

When you listen to Venissa’s supple and lush reinterpretation of Holiday’s What’s New, with excellent piano accompaniment by John Stenger I might add, you are quickly drawn into her world of melodic decoration. She clearly demonstrates why she is such a scintillating interpreter of lyrics. What’s New is a 1939 popular song composed by Bob Haggart, with lyrics by Johnny Burke. It was originally an instrumental tune titled I’m Free by Haggart in 1938, when Haggart was a member of Bob Crosby and His Orchestra. The tune was written with a trumpet solo, meant to showcase the talents of band-mate Billy Butterfield. Crosby’s orchestra recorded I’m Free the same day it was written.

In time, this song earned its coolness credentials, via performances by Billie Holiday, John Coltrane, Miles Davis and others. Holiday and Benny Carter performed the tune on the 1955 Velvet Mood album. Word by word and note by note, Venissa gives an enthralling performance, exuding a voluptuous improvise style quite without precedence in the music of Holiday.

Just as she was on her first album, Santi has once again channeled her ideas through percussion-colourist and long-time band mate François Zayas, who is responsible for the majestic arrangements of 12 songs with which Santi, in turn, re-imagines the heartfelt repertoire of Billie Holiday in an idiom that melds the heartbeat of bata and offbeat of clave with African-American deep song. Also joining the vocalist on this musical odyssey are trumpet and flugelhorn players Tim Thompson and Chris Aschman, the late guitarist Jef Lee Johnson, pianist John Stenger and bassist Jason Fraticelli. Special appearances are also made by bassists Paul Klinefelter and Madison Rast, clarinetist Jon Thompson and percussionist Cuco Castellanos.

In a telephone interview while on the road to a gig in Los Angeles, Santi reflected on why Billie Holiday’s music hit a sensitive and personal nerve with her: ‘In the journey of putting these songs together, while I was delving into the lyrics and repertoire that I had started checking out when I was fourteen years old, I realized I had grown up into the songs,” explains Santi. “The journey has been long and at times dark. By daring to interpret the tunes as uninhibited as possible it enabled me to come face-to-face with something bordering on danger and I experienced great gratitude. What emerged was an-almost four-year labor of love that overflowed onto this record,” she concludes.

Santi took a daring musical chance with her rendition of Holiday’s immortal classic, Strange Fruit. The song was performed most famously by Billie Holiday, who first sang and recorded it in 1939. Written by the teacher Abel Meeropol as a poem, it exposed American racism, particularly the lynching of African Americans. Such lynching had occurred chiefly in the South but also in other regions of the United States. As we consider the powerful lyrics: “Southern trees bear a strange fruit, Blood on the leaves and blood at the root, Black bodies swinging in the southern breeze, Strange fruit hanging from the poplar trees.”

Venissa’s recording of Strange Fruit is impressive with soaring choruses which is something entirely of itself. Her voice sounds as if it have wings of a dove: luscious and tender, disciplined and nuanced, thick as cognac yet soared off the beaten path like an instrumental solo, delivering on ideas other singers don’t permit themselves to contemplate because they can’t pull off the improvisational gambits that has now become the trademark of Venissa Santi. Strange Fruit is a triumphant and stunning piece that will be talked about for years to come!

When Billie “Lady Day” Holiday died in 1959, she left an indelible and seminal influence on jazz, blues and pop singing. Her vocal style, strongly inspired by jazz instrumentalists, pioneered a new way of manipulating phrasing and tempo. Love, for Billie Holiday, was momentous: desperately wanted; desperately denied. And love was what she mostly sang about – love lost; love found. Big Stuff: Afro-Cuban Holiday clearly validates that Venissa Santi knows something about the pain and emotional turmoil relationships can sometime bring, which is why you can hear the melting tenderness that infuses every song on this album.