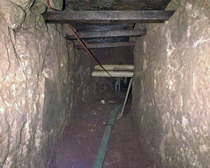 Investigators believe the tunnel, which was in the final stages of construction, would have exited on the U.S. side through a public parking lot located near the Dennis DeConcini port of entry. The passageway stretches for approximately 160 feet and is roughly two feet wide by three feet tall. About 153 feet of the tunnel is located within the United States, with seven feet in Mexico. A water line, storm drain pipe and two fiber optic lines were exposed inside the passageway. No people or drugs were found inside the tunnel and no arrests have yet been made in the case, which remains under investigation by the Nogales Tunnel Task Force.

Federal authorities have discovered and shut down six cross-border smuggling tunnels in the Nogales area in fiscal year 2013.