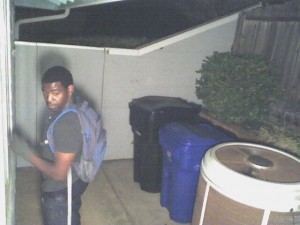 SAN DIEGO–Crime Stoppers and investigators from the San Diego Police Department’s Northern Division are asking for assistance from the public to help identify and locate an unknown male suspect wanted for questioning in a burglary.

Detectives said that on June 10 at approximately 3 a.m., an unknown suspect gained entry into a home in the 2700 block of Inverness Drive in San Diego. The occupants of the home were away on vacation. There were no signs of forced entry, but the front door was later found open. The unknown suspect vandalized the interior of a car in the garage in what appears to be an unsuccessful attempt to steal it. Nothing else was found missing in the residence and it is unclear what may have scared the suspect away.