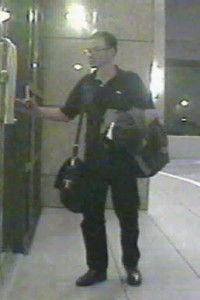 San Diego County Crime Stoppers and investigators from the San Diego Police Department’s Central Division are asking for assistance from the public in identifying a suspect wanted for a downtown vandalism and attempt burglary.

Investigators said on Wednesday, August 18 at approximately 2 a.m., an unknown male suspect walked to 550 Front Street and attempted to gain entry into a condo complex; the door was locked to the condo complex and the suspect did not gain entry. A video camera at the complex did capture a picture of the suspect who was holding a cutting tool in his right hand. The suspect then walked to 500 Union Street where he used the cutting tool to cut out the back window of a parked BMW soft top. As the suspect was looking into the vehicle a security guard scared him away. This is the third recent similar case in this area.

The suspect is described as white or Hispanic adult male, thin to medium build, wearing eyeglasses, polo shirt and pants.

Investigators are asking anyone with information on the identity and or location of the person responsible for this crime to call SDPD Central Division at (619) 744-9500 or the Crime Stoppers anonymous tip line at (888) 580-8477. Crime Stoppers is offering up to a $1,000 reward to anyone with information that leads to an arrest in this case. Anonymous email and text messages can be sent in via www.sdcrimestoppers.com.