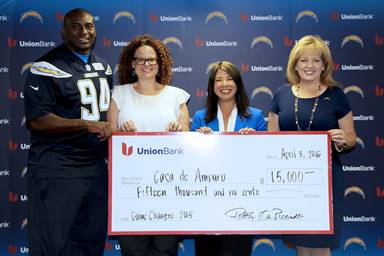 SAN DIEGO–As part of its ongoing commitment to responsible banking and its continuous support of the San Diego community, Union Bank partnered with the San Diego Chargers for its annual fundraising program called Game Changers, which raised more than $15,000 for Casa de Amparo over the course of the Chargers’ 2015-2016 Season.

Union Bank has been a proud sponsor of the San Diego Chargers for more than 10 years, and during the last three years, the Game Changers program has raised more than $45,000 for local non-profits.

“This is what teamwork is about — working together with the San Diego Chargers and the Chargers’ generous fan base to help a great organization in our community,” said Preciado. “Union Bank is proud to support the Game Changers program and the important work of Casa de Amparo.”

Every dollar donated supports Casa de Amparo’s initiatives to prevent child abuse and mistreatment. Casa de Amparo serves more than 1,000 Casa Kids and young adults, from prenatal to 25 years old, as well as nearly 1,000 families, including more than 50 military families, annually, through six integrated programs that promote healing, growth, and healthy relationships. The donation will contribute to Casa’s initiatives to help put a stop to child mistreatment of any kind and end generational cycles of abuse.

The Game Changers fundraising program invited fans at Chargers home games to gather their loose change and dollar bills and donate at the Game Changers Mobile for a fun, interactive fundraising activity. As part of the program, attendees also had the chance to win a variety of prizes, such as rally towels and football gear signed by Chargers players, including Philip Rivers. Fans also had opportunities to win upgraded seats to watch the Chargers play.

Total donations were matched by Union Bank and the San Diego Chargers, up to $5,000 each.