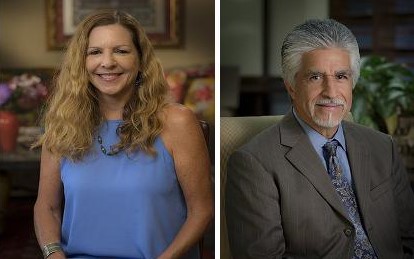 SAN DIEGO–In celebration of Hispanic Heritage Month and as part of its ongoing commitment to inclusion, diversity and responsible banking, Union Bank has partnered with KPBS to honor two inspiring local heroes.

The 2016 Hispanic Heritage Month honorees are: Patricia Rincon, artistic director, of Patricia Rincon Dance Collective; and Robert Rivas, founder and CEO, Encuentros Leadership. The honorees will be recognized at a private dinner with their families and executives from KPBS and Union Bank.

Since 1998, KPBS and Union Bank have collaborated on the Local Heroes program and recognized more than 200 honorees. The program pays tribute to exemplary leaders who are making a difference and enriching the lives of others by improving their community, region and the world at large. The 2016 Hispanic Heritage Month honorees demonstrate a shared commitment to providing their communities with the tools to thrive in today’s changing world.

“We are proud to join with Union Bank to honor Robert and Patricia for their exemplary community service during Hispanic Heritage Month,” said Tom Karlo, KPBS general manager. “Their work in our community makes it a better place for all of us.”

Patricia Rincon, Artistic Director, Patricia Rincon Dance Collective, has demonstrated her commitment to and promotion of diversity through her years of dance making. Known for her adventurous programming and cultural investigations using multi-media, live music and performance art, Rincon has provided performance opportunities to diverse dancers, including many Hispanic artists.  She has served on UCSD’s dance faculty for 39 years and as Head of Dance for the past seven years.  Rincon has performed, directed, and choreographed performances and workshops in Mexico, Argentina, Europe, and California. As Artistic Director of the Patricia Rincon Dance Collective, she developed the annual Blurred Borders International Dance Festival series and the Myth Project: American Dream dance-theatre series.

Robert Rivas, founder and CEO, Encuentros Leadership, has focused his work on supporting boys of Latino descent to achieve optimal performance in education. Encuentros Leadership addresses the critical educational, social and economic issues impacting the quality of education and life opportunities for Latino boys within the San Diego community. Rivas implements culturally relevant interventions to decrease the Latino male dropout rate in secondary education and increase Latino male post-secondary education participation, retention, and graduation rates. Efforts have been successful over the last three years — boys in the program have scored an average of one grade point higher than their peers not in the program, as well as have a higher attendance rate and fewer discipline problems. The White House Initiative on Educational Excellence selected Encuentros Leadership for Hispanics as a “bright spot” in Hispanic Education.