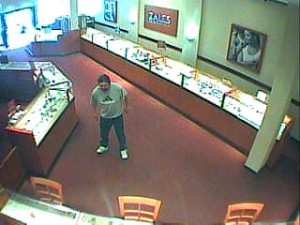 SAN DIEGO–Investigators from the San Diego Police Department’s Eastern Division are asking for assistance from the public in identifying two suspects wanted for grand theft.

Investigators said on April 6 at approximately 1:40 p.m., an unknown white male entered Zales jewelry store located in the Mission Valley Mall. The suspect asked to see a diamond ring valued at $12,000. The clerk showed the suspect the ring who agreed to purchase it. When the clerk retrieved paperwork for the purchase, the suspect fled the store with the ring. He was last seen in the passenger side of a small truck leaving the mall.

The other suspect, 40-45 years-old, 5’9”-5’10” tall, medium to heavy build, brown hair and eyes. He was wearing a grey t-shirt, blue jean pants and white sneakers. The suspect had a swollen right leg and walked with a limp.

Investigators are asking anyone with information on the identity and or location of the persons responsible for this crime to call SDPD Eastern Division at (858) 495-7900 or the Crime Stoppers anonymous tip line at (888) 580-8477. Crime Stoppers is offering up to a $1,000 reward to anyone with information that leads to an arrest in this case. Anonymous email and text messages can be sent in via www.sdcrimestoppers.com.