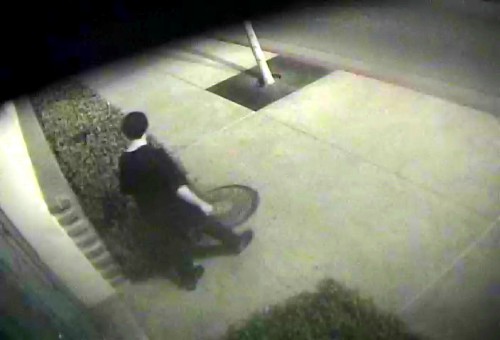 SAN DIEGO–Crime Stoppers and investigators from the San Diego Police department are asking for assistance from the public to help identify and locate an unknown suspect wanted for an attempted sexual assault.

Detectives said that on Sunday February 17, 2013 at approximately 1:22 a.m., a 23- year-old woman was walking home from the Gaslamp area in downtown San Diego. The woman noticed a white male suspect following her for several blocks. As she approached the 400 block of 13th Street, the suspect tackled her from behind and forced her to the ground. The victim screamed and fought with the suspect as he attempted to pin her to the ground. A nearby security guard heard the scream and came to the victim’s aide. The security guard pulled the suspect off the victim, but the suspect fought his way free and was last seen on foot, running from the scene.

The suspect is described as a white male, 20 to 25 years old, 5 feet-8 inches, medium build with brown hair.

Anyone with information on the identity and/or location of the suspect should call SDPD Central Division at (619) 744-9500 or the Crime Stoppers anonymous tip line at (888) 580-8477. Crime Stoppers is offering up to a $1,000 reward to anyone with information that leads to an arrest in this case. Anonymous email and text messages can be sent in via www.sdcrimestoppers.com.