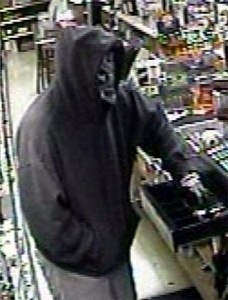 San Diego County Crime Stoppers and detectives from the San Diego Police Department’s Robbery Unit are asking for assistance from the public in identifying a suspect wanted for the robbery of a liquor store in Mira Mesa.

Detectives said on May 29 at about 10:35 p.m., an unknown male suspect robbed the Village Liquor store at 11267 Camino Ruiz, in Mira Mesa. The suspect threatened the clerk with a simulated gun in his sweatshirt (no gun was seen) and got away with an undisclosed amount of cash. The suspect was last seen exiting the front door of the business heading north on foot.

The suspect is described as a male (unknown race), 5’8”-5’10” tall with a thin to medium build. The suspect was wearing a gray and black mask to cover his face, black hooded sweatshirt, light grey sweatpants, and black and white gloves.

Detectives are asking anyone with information on the identity and or location of the person responsible for this crime to call the SDPD Robbery Unit at (619) 531-2299 or the Crime Stoppers anonymous tip line at (888) 580-8477. There is a total reward of $10,000 offered in this case. Crime Stoppers is offering up to $1,000 based upon arrest.

The Neighborhood Market Association is offering up to $9,000 based upon arrest and conviction. Anonymous email and text messages can be sent in via www.sdcrimestoppers.com.