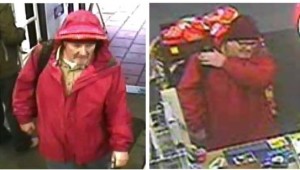 The suspect was described as a 50 to 60 years-old white male, six feet tall with a heavy build. He was also bald and wore glasses.