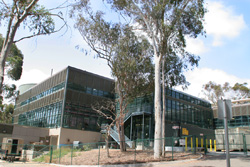 The university’s natural-gas-fired CHP plant is called a cogeneration plant because it generates electricity to run lights and equipment and captures the waste heat to produce steam for heating, ventilation and air conditioning of much of the 12.5 million gross square feet of campus buildings. The air-conditioning component includes a 3.8 million gallon storage tank that is filled at night with cold water and used during the warmest times of the day to cool campus buildings.

The CHP system also effectively reduces carbon dioxide emissions by an estimated 82,500 tons per year, which is equivalent to the annual emissions from more than 13,700 passenger vehicles. The EPA award described the “impressively low” emission levels of nitrogen oxide pollutants as “one of the lowest levels for cogeneration in the San Diego County Air Pollution Control District.”

“This EPA award is a validation of UC San Diego’s strategy to use the latest technology to cut campus energy costs and reduce our emissions of greenhouse gases,” said Gary Matthews, vice chancellor of Resource Management and Planning. “It takes more than the latest technology to win such a great award and we couldn’t have won this honor without the talented, dedicated team that operates and manages our cogeneration plant.”

Since the EPA launched its ENERGY STAR program in 1992, it has led to greater use of energy-efficient equipment, products and practices throughout the country, reducing greenhouse gas emissions and saving money. In addition to UC San Diego’s efficient cogeneration plant, about 95 percent of the university’s appliances are Energy Star-rated.

“The university’s CHP system provides up to 85 percent of the campus’ annual electricity needs and up to 95 percent of its heating and cooling needs,” said John Dilliott, the energy and utilities manager for the campus. “In addition, the chilled water produced at the plant reduces the university’s peak energy demand 3-6 megawatts per day.”

“Solar Turbines is proud to have contributed to the success of UC San Diego being recognized by the EPA’s prestigious Energy Star program,” said James Umpleby, president of Solar Turbines. “Solar has invested and continues to invest in low emissions technology and improved efficiencies as part of our sustainability efforts. UC San Diego was one of our earliest customers for the Titan 130 combustion turbine generator sets and it has been a pleasure to work with a university dedicated to efficient and sustainable energy production.”

The cogeneration plant’s control room has taken on a new role as the hub of a smart microgrid, managing the cogeneration plant and 1.2 megawatts of photovoltaic solar capacity. With a $2 million grant from the U.S. Department of Energy, UC San Diego is currently installing the world’s first microgrid master controller and related optimizer application. When fully operational, the Smart Grid will function as a virtual power plant, scheduling energy self-generation, electricity imports and electric and thermal storage while factoring in the demand load and the variable price of electricity to buy or sell.

On June 4, the Sanyo Electric Group and UC San Diego announced a research collaboration designed to lead to the next generation of solar energy systems and energy management. The two partners will collaborate on multi-year, multi-disciplinary projects in the areas of renewable energy and energy storage research, development and education.

“Of greatest significance is the fact that our cogeneration plant has been operating at these ‘best practice’ levels for more than nine years, which serves as another testament to the university’s leadership role in sustainability,” said Byron Washom, UC San Diego’s director of strategic energy initiatives.