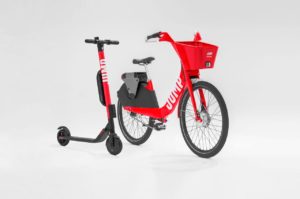 Uber begins rolling out JUMP e-bikes in the city, making it the 12th city in the world and fifth city in California to receive the red pedal-assist bikes.

JUMP bikes are electric and provide a boost with every pedal (up to 20 mph), making it easier for riders to get around their city without breaking a sweat.

The bikes have integrated “lock to” technology and feature GPS intelligence, to encourage riders to lock their bikes in responsible locations outside of the pedestrian pathway.

“We see a world where people in San Diego can easily live without a car by taking advantage of a wide variety of transportation options, from ebikes to rideshare and beyond, requested right from the Uber app” said Mike Egziabher, General Manager, Southern California, JUMP. “Today’s launch gets us closer to that vision by giving people in San Diego an affordable, environmentally friendly way to get from point A to point B.“

While pricing varies by city, in San Diego at launch, ebikes will cost $1 to unlock and then just 10 cents per minute to ride. As part of a launch promotion, riders get five free trips up to 30 minutes long each day through December 9. JUMP will start with 300 bikes available across a 28 square mile radius, from Pacific Beach all the way downtown to Crim avenue; and from the northmost point at Chalcedony St. to the southmost point at National Ave.

In 2017, JUMP bikes launched the first ever dockless electric bike share system in the United States. Dockless bike share expands transportation options for residents by making it easier to rent and park a bike anywhere within the service area, instead of at designated stations. In May, Uber acquired JUMP as part of its mission to expand the menu of affordable, reliable transportation options that can be requested using the Uber app, and make it even easier for residents to get across town without relying on their own personal vehicle.

In California, JUMP is already bringing multimodal transportation to users across the state. In October, JUMP started expanding its fleet of bikes San Francisco, from 250 to 500 bikes after data showed that over 38,000 unique riders took more than 326,000 total trips during the pilot. Around Sacramento, JUMP recently expanded its service area by more than 50 percent to meet demand of more residents. And last week, it announced that it started deploying 3,000 ebikes and scooters across LA.

With both the Uber and JUMP mobile apps, users can find and unlock JUMP pedal-assist ebikes. It’s simple to use.

Tap the “mode switch” on the homescreen of the Uber app, and select bike

You’ll see the available JUMP bikes around you, and can select one to reserve.

The app will give you a pin number so you can unlock your bike.

Use the in-app map to find and reserve bikes – or simply walk up to a bike and enter your account number and four-digit pin.