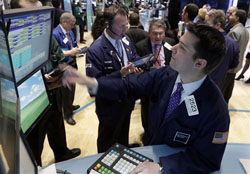 NEW YORK–(PRNewswire)– Top financial decision makers in the U.S. share an optimistic outlook towards the sustained economic recovery and opportunities for their businesses, according to findings from the most recent survey of Chief Financial Officers conducted by Financial Executives International (FEI) and Baruch College’s Zicklin School of Business. Despite concerns about the risks and costs associated with healthcare, CFOs maintain a more positive perspective as they enter the second half of 2013 than they did previously, especially towards hiring and employment opportunities.

Respondents to the “CFO Quarterly Global Outlook Survey,” which polls CFOs of public and private businesses in the U.S. on their economic and business confidence, are collectively more enthusiastic this quarter. The quarterly optimism index for U.S. CFOs toward their own businesses increased three points to 70.7 from 67.1 last quarter. Confidence toward the U.S. economy among respondents improved, rising to 61.2 from 58.5 in Q1, with nearly half of all respondents (49%) indicating they believe the U.S. economy to already be in the midst of a recovery. In the next 12 months, CFOs anticipate an 11% increase in net earnings and an eight percent increase in revenue.  CFOs plan to increase technology spending by seven percent. More than half of the CFOs surveyed said that they are currently directing investments towards dashboard and performance metrics (53%), and CFOs are also investing in social media marketing and looking at R&D, cyber security and risk management. However, CFOs project a 10% increase in costs related to healthcare.

CFOs also weighed in on their concerns about various international economies. U.S. CFOs confidence in the global economy showed improvement, with an increase to 53.9, up three points from the previous quarter (50.8). Nearly three-quarters (73%) of U.S. CFOs believe their businesses will be unaffected by a slowdown in China’s and India’s economy and more than half of respondents (55%) estimate that the current government stimulus program in Japan will be unsuccessful. Businesses appear to be more vulnerable to the European economy, with 78% of respondents rating their concern about the fate of the Eurozone at a “three or higher” on a scale of one to five (with one being “not concerned”). Furthermore, 44% of respondents do not expect to see a recovery of the European economy until 2015 or beyond.

“The results of this quarter’s survey show that overall economic confidence among financial leaders in the U.S. has improved,” said Linda Allen, Professor of Economics and Finance for the Zicklin School of Business at Baruch College. “Particularly encouraging is the attitude towards hiring: 61% of CFOs plan to hire within the next six months, and employee compensation is expected to increase by 3.5%.”

The respondents’ optimistic view on hiring and employment at their companies is reflected in their plans to hire mid-career professionals, entry-level college graduates and experienced and skilled technical workers. In addition to plans to hire, nearly three-quarters of U.S. CFOs (72%) said they did not have to reduce their workforce over the past 12 months. CFOs also expect the U.S. employment rate to improve, declining slightly to 7.3 one year from now.

“Previous surveys have shown reduction or minimal growth in the number of U.S. CFOs with plans to hire additional staff. However, the results of this quarter’s survey could indicate this trend is turning around,” said Marie Hollein, President and CEO, Financial Executives International. “It is hopeful to know that employment opportunities are expected to increase for professionals across a variety of levels, and that healthcare costs have not deterred many businesses from taking on full-time staff members.”

Other findings from the CFO Quarterly Global Outlook Survey include the following: