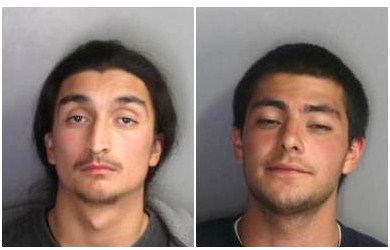 VISTA—Sheriff investigators and Crime Stoppers are searching for two men wanted in a connection with a stabbing in Vista.

On June 1 at about 9:20 p.m., three suspected gang members attacked a group of men walking in the 700 block of North Citrus Avenue. One of the victims was stabbed multiple times with a knife. He was treated at a hospital.

The Sheriff’s deputies arrested one of the suspects, Felipe Moreno, but two others remain at large.

Lucas Cantabrana and Abel Abrego are known to hang out in Vista and the North County, investigators say.

The two suspect are considered armed and dangerous.

Anyone with information on Cantabrana and Abrego’s whereabouts can call Crime Stoppers at (888) 580-8477. You can remain anonymous and be eligible for up to a $1,000 reward for information that leads to an arrest. You can also send a tip online athttp://sdcrimestoppers.org/send-tip/.