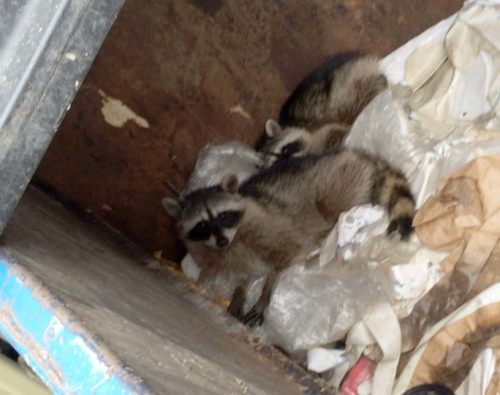 A person at the plant called County Animal Services after finding the raccoons stuck in the dumpster. The animals were unable to climb out.

Animal Control Officer Angela Jones arrived at the plant, and used her rescue equipment to get them out safely.

“Usually wild animals like these tend to hide deep in the dumpster debris when people come around,” said County Animal Services Lieutenant Mitchell Levy. “Luckily, someone noticed before they were crushed.”

The raccoons were healthy and uninjured so Jones took them several blocks away to the San Diego River and released them back into the wild.

County Animal Services is usually associated with cats and dogs but it rescues all kinds of wildlife, too. Raccoons and opossums in dumpsters are relatively common but animal control officers also rescue coyotes, skunks and an occasional bobcat in trouble. If they are sick or injured, they’re taken to Project Wildlife or Fund for Animals.

If they’re healthy, animal control officers will relocate them nearby so they’re in a familiar habitat and know how to find food and water.