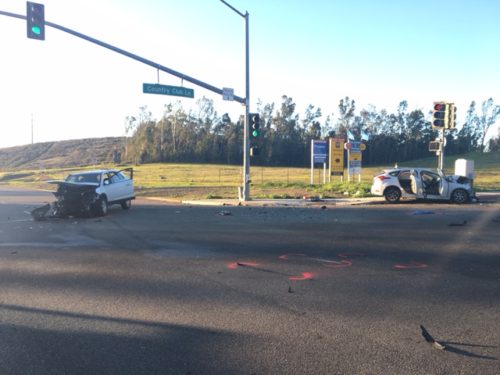 Just after 1 a.m., Escondido Police Department were dispatched along with the Escondido Fire Department to the area of Centre City Parkway at Country Club Lane regarding a serious injury collision involving two vehicles.

Based on witness statements and physical evidence at the scene it appears a 21-year-old male was driving south on Centre City Parkway in a white 2016 Ford Focus. A 30-year-old male driver in a white Kia Sorrento was making a left turn from Centre City Parkway to westbound Country Club Lane. The two vehicles collided causing major injuries to two of the three passengers in the Ford Focus. The driver of the Kia did not have any passengers on board and had only a complaint of pain.

One of the female passengers in the Ford Focus suffered traumatic head injury and serious injury to her heart. These injuries are considered life threatening. The second female passenger suffered a punctured lung and a serious spinal injury.

There was evidence at the scene that the driver of the Ford Focus had been drinking alcohol. The other driver had not been drinking and impairment was not a factor.

The traffic investigation is ongoing.

Escondido police is seeking the public’s help with anyone who may have witnessed the accident, or has any additional information about the collision. Witnesses are encouraged to call Officer Beierly at (760) 839-4410.