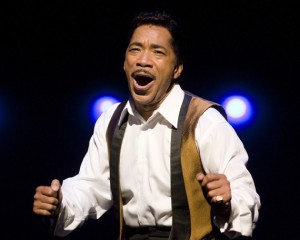 Obba Babatundé as Sammy Davis, Jr. in the world premiere of Sammy, a new musical by Leslie Bricusse at The Old Globe. Photo: Craig Schwartz.

SAN DIEGO–Old Globe’s world premiere productions of Sammy and The First Wives Club – A New Musical were the recipients of five 2010 NAACP Theatre Awards. The awards presentation was held on Monday, Aug. 30 at the Director’s Guild of America in Hollywood.

The Old Globe was named Best Producer for the world premiere production of Sammy. Broadway veteran Obba Babatundé won the Best Lead Actor award for his astonishing portrayal of Sammy Davis Jr. and Ian Frasier, winner of 11 Emmy Awards for his musical talents, picked up the award for Best Music Director. The new musical’s book, music and lyrics were written by Oscar and Grammy Award winner Leslie Bricusse and premiered at the Globe Sept. 19 – Nov. 8, 2009.

“We are proud to be recognized by the NAACP for our achievements during the 2009-10 season and offer our enthusiastic congratulations to Obba, Ian, Francesca and Mark,” said Spisto. “The Old Globe has long had a commitment to diversity and we continue to develop and present programming to further our goals.”

The Old Globe is located in San Diego’s Balboa Park at 1363 Old Globe Way. There are numerous free parking lots available throughout the park. Valet parking is also available for $10.