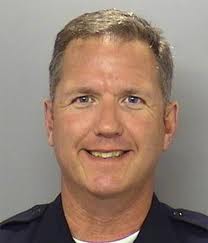 Alex Chaurfauros, 29, received 85 years-to-life plus an additional 11 years in state prison, and co-Patrick Luangrath, 22, was sentenced to 22 years and four months in prison by Superior Court Judge Kenneth So. Charfauros was convicted of second-degree murder of a police officer, four counts of premeditated attempted murder of a police officer, attempted shooting of a police dog and various other drug and gun offenses by a jury in August. Luangrath, pleaded guilty to voluntary manslaughter, a gang allegation and an unrelated residential burglary.

“Nothing can bring back the life of Officer Christopher Wilson, but today’s prison sentences are a measure of justice and the defendants in this case have been held accountable for their roles in this crime,” District Attorney Bonnie Dumanis said.

Officer Wilson was killed in 2010 when he entered Charfauros’ apartment as part of a search being carried out at the probationer’s home. Probation officers, U.S. Marshals and Officer Wilson, repeatedly asked him if there were guns, people or drugs in the home, to which Charfauros, replied no or he didn’t know. Immediately after one of the officers kicked in the locked door of the second bedroom, at least two of the occupants started shooting at the officers, resulting in Officer Wilson being mortally wounded by a gunshot wound to the head.   Luangrath and his girlfriend, Melissa Ortiz, eventually emerged from the bedroom three hours after the shooting.  When San Diego police detectives entered the bedroom, they found Holim Lee and Lucky Xayasene dead from self-inflicted gunshot wounds.

Melissa Oritz, another co-defendant, pleaded guilty on September 19 to voluntary manslaughter, a gang allegation based upon her conduct in the Officer Wilson incident.  She also pleaded guilty to robbery, a gang allegation and a gun allegation due to her participation in the April 4, 2011, robbery of the Apple Store in Chula Vista which resulted in the death of one of her co-participants, Alex Choulamontry. She will be sentenced to 25 years and four months in state prison on October 17.