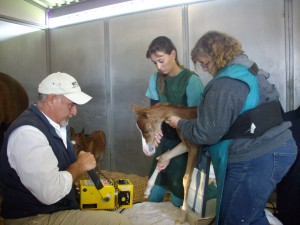 HWAC spokesman John Van Zante says, “A worldwide audience watched as the doctor, assisted by Equine Hospital Manager and Registered Veterinary Technician (RVT) Christen Hanley and RVT Linda Blair, used a portable radiograph unit to view the bones in Angel’s knee then wrap the knee and apply a splint. It runs from her shoulder to her hoof. It’s pretty clumsy, but she’s adapting.”

Her owner didn’t know Lena was expecting twins until they were born. Tests indicated that there was one foal…a colt (male). But when Sunny came out there was another foal in the same placenta. This is called an, “Eclipse” birth. Sunny and Angel came out one right after the other at 5 a.m. on Sunday, March 28.

Dr. Vazquez says that the birth of twin foals is very rare. “It can be extremely dangerous for the mare and the foals. Most twin pregnancies are interrupted around the second week of gestation to prevent a mid-term abortion.”

Just because Sunny and Angel survived birth doesn’t mean that they’re out of danger. Van Zante says, “They’re active and they look great, but we can’t drop our guard. The chance of both Sunny and Angel surviving more than 2 weeks is as little as a one in 15,000. After the earthquake on Sunday afternoon the online video site received several questions about the foals’ safety. That’s minor compared to the fact that they were born alive as twin foals.”