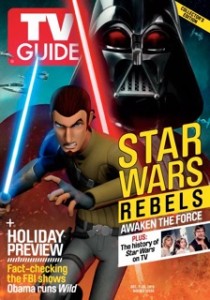 New York, NY–The Force is strong with TV Guide Magazine, as the new issue, out today, features Disney XD’s hit CGI series “Star Wars Rebels” on the cover.
Senior Writer Damian Holbrook didn’t need any Jedi mind tricks to get the latest news on Star Wars Rebels from executive producer Dave Filoni. The series, now in its second season, set 5 years before the 1977 feature film “A New Hope,” is the network’s No. 1 show among adults 18 to 49. Bridging the gap between the two film trilogies, the series chronicles a band of rebels in the very early stages of Darth Vader’s reign. Filoni, who was interviewed by George Lucas himself a decade ago, hipped TV Guide to some major news. “Grey’s Anatomy’s” Kevin McKidd is voicing a new character, and one major legacy character from the films (not even Yoda could read his thoughts to discern who) is soon to be revealed in the series.
He tells TV Guide, “Since ’05, I’ve been quite literally studying the ways of the Force year in, year out, trying to improve my skills.”
TV Guide also takes a look at the history of “Star Wars” on television.
Wondering what to watch to fill the house with holiday merriment and cheer? TV Guide Magazine’s Holiday Preview is here with a look at holiday episodes of “Fresh Off The Boat,” “The Originals,” “The Middle,” “Brooklyn Nine-Nine,” “Life in Pieces,” “NCIS: L.A.,” “Arrow,” black-ish, plus a special highlight for kids including Super Why!, Girl Meets World, Fraggle Rock and more.
Also in the issue:
Also scene stealer Loretta Devine, “Supergirl,” “Michael Buble’s Christmas in Hollywood,” “The Vampire Diaries,” “Bones,” “SNL,” Andy Cohen, “Fargo,” “Luther,” “NCIS,” “Elementary,” Cheers and Jeers, Primetime Listings, and more.