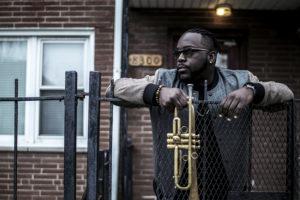 Marquis Hill’s June 24, 2016 “The Way We Play” album has him stretching the range of the trumpet by a couple of octaves, and making stratospheric notes look easy to play. (Photo by Deneka Peniston)

SAN DIEGO – Composer, band leader, trumpeter, music educator, arranger, and 2014 Thelonius Monk International Jazz Competition (Trumpet) winner, Marquis Hill, and his ensemble of four years, the Blacktet, are about to set the jazz world on fire with his June 24, 2016 Concord Records CD release called The Way We Play. Beyond hard bop, a mixture of Chicago hard-hitting swing, and a feverish soul and funk mix, Hill’s “The Way We Play” explores a sonic deliverance based on the fiery personality of his music and a refusal to stand still or be satisfied with standardized phrasings and classification.

“The Way We Play” is Hill’s fifth album with the last four [Skiptone Music – New Gospel (2011), Sound of the City (2012), The Poet (2013) and Modern Flows, vol. 1 (2014)] featured the Blacktet as well, spotlights Hill revamping a handful of jazz standards – most of them learned during his formative high-school years. Reexamining classics such as Herbie Hancock’s “Maiden Voyage” and Monk’s “Straight No Chaser” alongside rarities such as Carmell Jones’ “Beep Durple” and Donald Byrd’s “Fly Little Bird Fly,” Hill takes an emphatically up-to-the-minute, groove-centric approach to the catalogue that places “The Way We Play” firmly into the modern and contemporary music scene.

Here is how “The Way We Play” goes down. We have Hill and the Blacktet cats working like a well-oiled rhythm section machine should that is surpassing excellence, unprecedented in its own right and definitely unequaled to any jazz ensemble currently playing on the circuit. With trombonist Gardner, percussionist Pastor, and spoken-word artist Green III easing in and out of the sets with perfect precision and timing, Hill has accomplished a masterpiece in the arrangement and producing of this album.

In a telephone interview with San Diego County News, the 29-year-old Chicago native expressed his rationale for wanting to do this album: “My previous albums were mostly original compositions. In this Concord Records debut I decided to concentrate on classic standards of which I grew up listening to and performed over the course of my musical journey,” explained Hill. 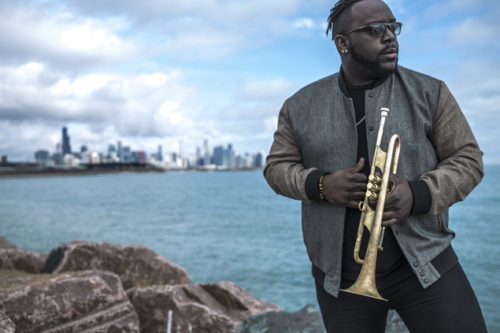 Chicago native Marquis Hill, one of the leaders of the “Young Lions” of trumpet, has evolved into a superb trumpeter with a future that is boundless.
(Photo by Deneka Peniston)

“When I met Christie a few years back and heard her golden voice, I told her right there – at some point we will be making some beautiful music together,” Hill shared. “My Foolish Heart is the perfect song for someone of Christie’s enormous talent – I was more than pleased with the finish results,” Hill stated.

And some beautiful music they did – for “The Way We Play” has Dashiell singing musically the 1949 Oscar nominated song “My Foolish Heart” at her peak. She is often underestimated as an interpreter of lyrics. Note in this selection where she imparts a sexy current while heightening the rhythm and varying the phrasing. She mines the title phrase in the lower part of her midrange, making it coy and husky. She lightens up on “his lips are too close to mines…for this time it isn’t fascination or a dream that will fade or fall apart,” making them exceedingly seductive. Other words she capitulates held forth like great sunsets – “take care my foolish heart.” Word by word and note by note, Dashiell delivers an enthralling performance, exuding a voluptuous virtuosity quite without the precedence in the music of, say, Billie Holiday or Sarah Vaughan.

The music on this album is a nice mixture of Hill’s straight ahead side and his more funky fusion tinged side as well. The set opens with “Welcome/Bulls Theme,” yeah you got it right — this funky tune came straight off the Chicago Bulls intro of its players’ theme yall!

“Straight, No Chaser,” a Monk classic features a wild and free introduction that never lets up until the very end! Despite the velocity and rhythmic complexity of the theme, the trumpet and the sax seem to breathe as one, especially on the slurred notes of the tune’s roller-coaster ride. Sax man McBride does his intro and enters Hill, who swings into a laid back funky tempo that is brutally fast, but despite the speed and the general impression of volatility, Hill colors his solo with ingenious conceits. Hill’s sound is fat and sensuous yet jagged and hard, utterly unlike the cultivated approach of most trumpeters on the scene today. While the horns play the rife like melody and some rhythmic acrobatics from the rhythm section, especially dig Ramos’ strong chorused bass work that punches strong through the mix.

“The Way We Play” is undoubtedly Marquis Hill’s best work up to this point in his musical recording journey. The main reason why this album is so good is that it has a broad appeal that might be considered exceptional, and the musical arrangements by Hill is impeccable. He combined the sound of Freddie Hubbard and Donald Byrd with the innovations of a John Coltrane to create his own unique sound. “The Way We Play” is definitely Straight – No Chaser!