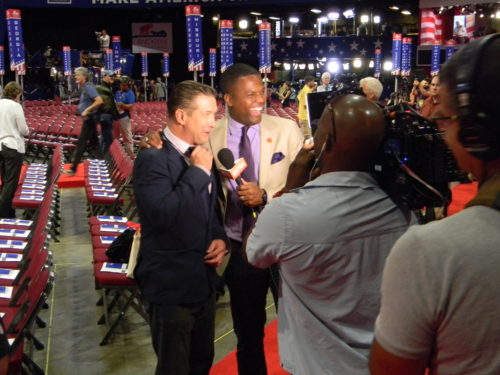 CLEVELAND – United briefly for a night, Republicans nominated Donald J. Trump Tuesday as their presidential standard-bearer, capping the billionaire businessman’s stunning takeover of the GOP and thrusting him into a November faceoff with Democrat Hillary Clinton.

“I will work hard and we’ll win in November!” Trump stated in a live feed from Trump Towers in New York which was beamed to the Cleveland convention delegates. Trump’s campaign hoped the formal nomination would both end the discord rolling through the Republican Party and dominated the convention’s chaotic kickoff, including a plagiarism charge involving Melania Trump’s address on opening night.

There were bursts of dissent and confusion on the convention floor as states that Trump did not win recorded their votes, but he far outdistanced his primary rivals. His vice presidential pick, Indiana Gov. Mike Pence, was also formally nominated.

Trump was put over the top by his home state of New York. Four of his children joined the state’s delegation on the convention floor for the historic moment and appeared overwhelmed with emotion.

Some delegates emphasized a need for a televised display of unity after the deeply divisive GOP primary. “United we stand, divided we fall,” said Peter Hamlin, a Trump delegate from Alabama.

But Utah’s Ken Urusal, a leader of the anti-Trump forces, called the convention a “mockery and a disgrace” and warned RNC Chairman Reince Priebus and House Speaker Paul Ryan that their efforts to silence opposition would keep some Republicans on the sidelines in the fall campaign against Clinton. 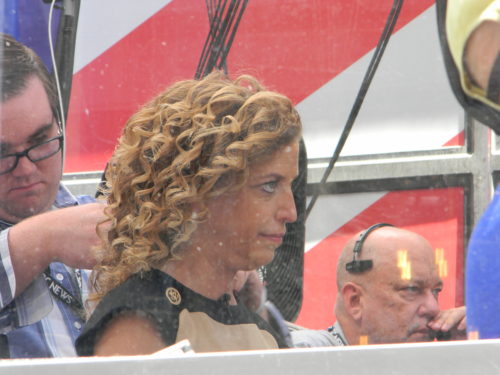 This week’s four-day convention is Trump’s highest-profile opportunity to convince voters that he’s better suited for the presidency than Clinton, who will be nominated at next week’s Democratic gathering. A parade of Trump’s campaign rivals and Republican leaders lukewarm about his nomination took the stage Tuesday night to vouch for the real estate mogul, including House Speaker Ryan.

Still, the plagiarism controversy and other unforced errors by the campaign cast a shadow over the convention and raised fresh questions about Trump’s oversight of his campaign, which gives voters a window into how a candidate might handle the pressures of the presidency.

Trump’s campaign failed to quell the controversy on Day 2 of the convention by insisting there was no evidence of plagiarism, while offering no explanation for how the strikingly similar passages wound up in Mrs. Trump’s address. The matter consumed news coverage from

Cleveland until the evening vote, obscuring Mrs. Trump’s broader effort to show her husband’s softer side.

Seizing an opportunity to capitalize on the major high profile gaffes in Cleveland, Hillary Clinton stated late Tuesday evening that she thought she was “looking at the Wizard of Oz.” “When you pull back the curtain, it was just Donald Trump with nothing to offer to the American people,” Clinton said during a speech in Las Vegas. 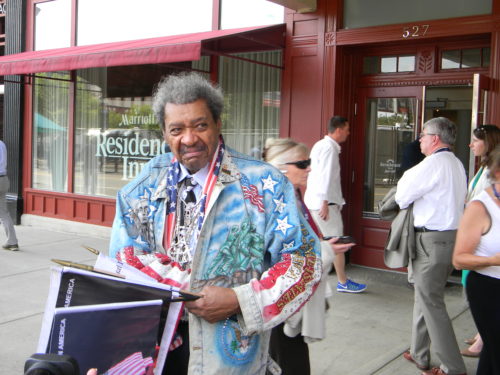 Former Trump campaign manager, Corey Lewandowski, went even further to suggest that the man who ousted him from his position with Trump, Paul Manafort, should resign for not vetting the speech more carefully.

Anti-Trump Demonstrators Are in Full Force in Cleveland

Cleveland police separated a group of anti-Trump protesters and a small crowd of counter-demonstrators who had been hurling anti-LGBT slurs at the crowd. About a dozen men wearing hats that read “Fear God” or “Obey Jesus” began antagonizing the anti-Trump demonstrators after an otherwise peaceful march through downtown and past the Quicken Loans Arena.

At one point, the counter-protesters screamed “Micah Johnson is your hero,” referring to the Dallas shooter who killed five police officers. Anti-Trump protestors returned with chants of “Black Lives Matter.”

Cleveland police on bikes formed a barrier between the two groups and no one appeared to have been arrested.

Rev. Jeremiah Henderson, pastor of a small Pentecostal church outside of Canton, Ohio, came to let Trump know “that he is one of the biggest liars and sinners there is.” Henderson had a few choice words for the “so-called religious leaders” who went to Trump Towers for a mini-summit earlier this month.

“All of these ministers and evangelists who claimed to believe in Jesus are false prophets,” stated Henderson. “And they are not worthy to speak for any of the true Bible believing Christians who oppose Trump’s nomination to head the Republican Party.”

Henderson went on to state: “I have never seen so much kissing butt and lying by false religious preachers in all of my 30 years in the ministry.” What upset Henderson the most is that the religious elites such as Jerry Falwell, Jr., Jimmy Swaggart, James Dobson, and Dr. Robert Jeffress have “taken a hypocritical position by supporting Trump with his self-righteousness and got the nerve to criticize Clinton.”

“You mean to tell me that the possibly future First Lady, Mrs. Trump, will be known the world over as posed half naked in a magazine. Are we not outraged. If this was Mrs. Obama all hell would be breaking loose in churches across America,” Henderson confessed. 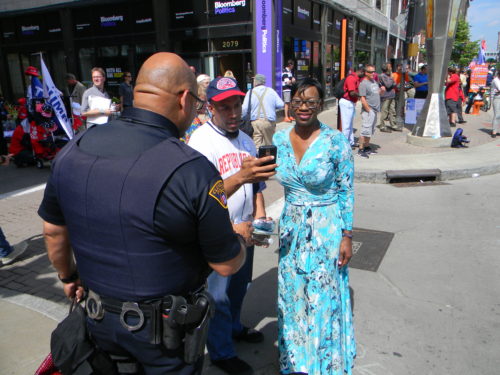 Bernie Sanders supporter Nina Turner posing with fans said, “We must not make a mistake and place a racist and bigot in the White House,” referring to Donald Trump. Danny R. Johnson, San Diego County News

Henderson stated that he and millions of other “true Christians” will sit out this election come November.

Another demonstrator, Robert Huseman, a 40 years staunch Republican who has voted for every Republican candidate (local, state, and national) in his home state of Monroe, LA, stated that he is “ashamed and appalled of what the Trump family is doing to the Republican Party.”

“For the Trump children to try to paint their father as some compassionate and caring person in light of all the crap he has said about women, minorities and people in general, is a disgrace,” Huseman stated.

“Not only is he and his family are mean and nasty, the man does not have a clue how his proposed policies will affect average people,” Huseman angrily stated.

There were no big missteps Tuesday, but the event was void of the glitzy, Hollywood touch Trump promised, with a series of Republican officials parading on stage to level sharp, but repetitive, criticisms of Clinton.

New Jersey Gov. Chris Christie was one of the few speakers to energize the crowd, delivering a full-throated takedown of Clinton and imploring delegates to shout “Guilty!” as he ticked through numerous accusations of wrongdoing.

“We didn’t disqualify Hillary Clinton to be president of the United States, the facts of her life and career disqualifies her,” Christie said.