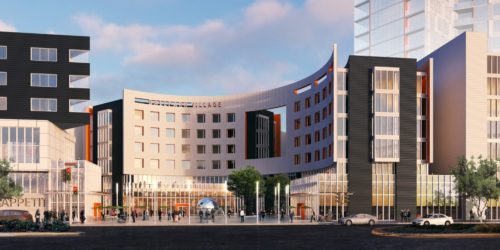 Illustration of Park 12 mix- use community.

Highlights of the initial three tenants include:

· Carmelita’s: Named one of Orange County’s top Mexican eateries by The Orange County Register, Carmelita’s will bring its hugely popular home-style fare to San Diego for the first time. According to Senior Managing Director of West Coast development for Greystar Jerry Brand, this newest downtown eatery – which has earned raves from the public and critics alike for its fresh, flavorful south-of-the-border cuisine – will be a boon for both Park 12 and the San Diego community overall. “Carmelita’s consistently ranks as one of Orange County’s best Mexican restaurants and we are thrilled to announce their first San Diego location at Park 12,” Brand said. Scheduled to open March 2019.

· F45 Training: Débuting its second location in downtown San Diego at Park 12 this fall, F45 is the hottest fitness concept in Southern California – opening in premier locations throughout the region. Appealing to all fitness levels, F45 offers athletes customized personal training in an energizing group environment. Certified trainers oversee all workouts – with live DJs adding to the challenging yet convivial ambiance. Scheduled to open late 2018.

· Creamistry: Offering a theatrical dining experience, Creamistry specializes in made-to-order, liquid nitrogen ice cream, using all-natural and organic ingredients with more than 60 flavors and toppings. Created entirely in front of the customer, the ice cream base is topped by liquid nitrogen which creates a billowing cloud – culminating in super smooth ice cream. “It’s as much entertainment as it is good dessert,” says Brand. Marking the chain’s first foray into downtown San Diego, Park 12’s Creamistry is scheduled to open February 2019.

With resident move-ins now underway in the tower, completion of Park 12 – previously known as Ballpark Village – is slated for Fall 2018.

Located immediately across the street from Petco Park, the community is comprised of one high-rise and three mid-rise buildings – all owned and operated by Greystar Real Estate Partners, LLC. When complete, the complex will include 371 luxury apartments in a 37-story tower and 347 units in one six and two-seven-story midrise buildings ­– for a total of 718 rental homes. Residences will include studio, one-, two- and three-bedroom floor plans – as well as penthouse suites – with square footage spanning from 518 to 2,824 square feet, with direct access to Petco Park for San Diego Padres baseball games and other special events.

The property’s four buildings, varying in size and scope, are connected by a pair of above-the-street bridges, enabling residents to easily move to and from amenity decks in the separate buildings.

With the feel of a walkable urban village, the community is anchored by an expansive semicircular public plaza at 10th and Park, where the retail venues and restaurants will line the public space – imbuing a lively, interactive vibe.