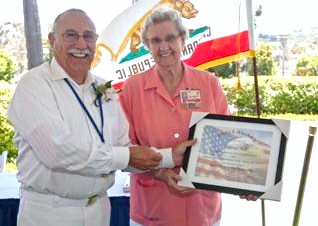 OCEANSIDE–Wearing familiar brightly-colored attire and a friendly expression, the men and women of Tri-City Hospital Auxiliary are easy for patients and visitors at the hospital to recognize; however, once a year, this deserving group of 700 community volunteers receives recognition of a different sort during its Annual Awards and Installation Luncheon.

Held June 30 at Tri-City Medical Center, this year’s event honored 60 dedicated auxiliary members whose volunteer service reached 1,000 hours or more—including one individual who had given 19,500 hours, as well as special mentions to the 101 members with 100 to 500 hours. Special appreciation awards were given to Renee Salas and Jeff Pigza for their support to the Tri-City Hospital Auxiliary.

Hospital CEO Larry Anderson acknowledged the extraordinary accomplishments of four volunteers who have each served the auxiliary for more than 25 years: Ruth Brown, Mimi Howland, Toni Baasch and Carol Schwanberg.

Auxiliary President Paul Martini presented the President’s Eagle Award to outstanding auxiliary leaders Dorothy Crabtree who has given nine years and more than 3,500 hours of service, Barbara Jennings with over eight years and 1,450 hours of service, and Mildred Hill with an impressive 22 years and more than 12,000 volunteer hours. He also recognized Tri-City Hospital Foundation President Tobi Ferguson with an Eagle Award for her contributions to the Auxiliary’s annual Tea Party and other volunteer appreciation events. Ferguson is the first person outside of the Auxiliary to have received the award.

“During my administration I felt it important to establish an award that would reward volunteers and others who gave not only their time but soared beyond the call of duty like these four inspiring women,” said Martini, who has served one year as auxiliary president and three years as a hospital volunteer.

“Our volunteers are truly treasures,” said Anderson. “Tri-City is lucky to have such wonderful people who give the gift of their time, energy and talents to others, and expect nothing in return. Much of what we are able to do as a hospital is because of the tremendous support our volunteers provide.”

The past year ending June 30 at Tri-City, revealed an average of 450 volunteers each month gave a combined 75,204 hours of community service.