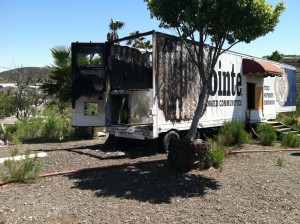 At 12:09 p.m., Cal Fire/San Miguel Fire District Firefighters responded to a commercial trailer fire in Spring Valley. When Firefighters arrived on scene, flames had breached the back roof of the trailer, reaching about 20 feet into the air. As emergency crews arrived, an area resident told firefighters he thought someone was in the trailer.

Once the fire was under control first responders entered the commercial trailer and found the victim on the floor in the front of the trailer. He had suffered from extreme smoke inhalation. Rescue teams preformed CPR on the victim for about 20 minutes. At one point a slight pulse had returned, at which time the victim was transported to Grossmont

Hospital, where he was pronounced dead.

An acquaintance of the victim told fire officials that the victim had taken advantage of a broken lock on the trailer door and began living there. There are two trailers kept at the corner lot, which advertise “Pointe Builders”. The acquaintance told investigators the trailer was “full” of trash.

The Sheriff arson/bomb detail is now conducting an investigation.