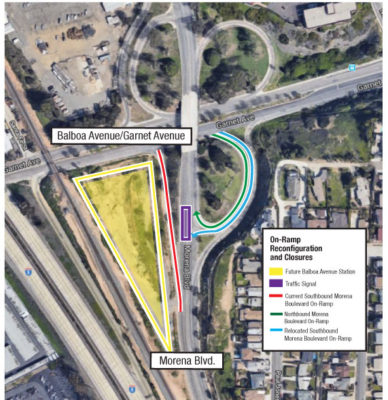 SAN DIEGO–Improvements to the Morena Boulevard loop ramp to and from eastbound Balboa Avenue will be opened for use on September 19.

The reconfiguration of the interchange was required to accommodate construction of the future Balboa Avenue Trolley Station parking lot.

The existing loop ramp from Balboa Avenue to northbound Morena Boulevard will be temporarily closed Tuesday night while crews restripe the new loop ramp and prepare it to accommodate both directions of traffic. Traffic controls and detour signs will be in place to direct motorists.

The work is being conducted concurrently with ongoing Mid-Coast Trolley construction on Morena Boulevard and Balboa Avenue/Garnet Avenue. Regular work hours are Mondays through Fridays, 7 a.m. to 5 p.m., with intermittent night work scheduled from 9 p.m. to 5 a.m.

The project is funded through the TransNet half-cent sales tax and the Federal Transit Administration.