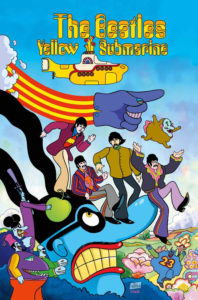 Beatles fans can celebrate the 50th anniversary of The Beatles’ Yellow Submarine at  Comic-Con as Titan debuts its hotly-anticipated official graphic novel adaptation chord ahead of the August 28 release. Writer/artist Bill Morrison, inker Andrew Pepoy, and Docolorist Nathan Kane give fans an exclusive behind-the-scenes look of the making of the graphic novel in a special Yellow Submarine panel on July 22 at 10 a.m. Plus, fans can get the debut edition signed by the creators at the Titan booth #5537 on July 19 at 11 a.m. and July 22 at 11:30 a.m.

Fans will get the chance to meet Jody Houser, who’ll be signing copies of Doctor Who: Road To The Thirteenth Doctor – Tenth Doctor #1, which features a Thirteenth Doctor lead-in story written by Houser, and comes with an exclusive Comic-Con cover by fan-favorite cover artist Kelly Yates – who will be also signing at the Titan booth, #5537.

Titan Comics presents a first look at V.E. Schwab’s Shades of Magic: The Steel Prince prequel comic book series – set in the world of the New York Times bestselling fantasy novel series – with an ashcan debuting exclusively at Comic-Con–only available at Titan booth #5537! V.E. Schwab will also discuss the origins of this hotly-anticipated new prequel comic at a panel on July 20 at 12 p.m. Plus, she will be signing copies of the SDCC ashcan straight after the panel at Titan booth #5537, and again on July 22.

As part of Titan’s Mickey Spillane centenary celebrations in 2018, join Max Allan Collins (Quarry’s War, Road To Perdition) as he discusses the life and legacy of Mickey Spillane in a special Hard Case Crime panel on Thursday, July 19 at 12:30 p.m. Plus, straight after the panel, Allan will also be signing copies of his new comic Mickey Spillane’s Mike Hammer – based on an original plot by Mickey Spillane – which comes with an exclusive Comic-Con virgin variant cover by James Bond artist Robert McGinnis.

Titan will have their first ever panel highlighting the hit Statix Press line of comics on July 19 at 2:30 p.m., which will include the announcement of a major new film project. Created to showcase some of the greatest talents from Europe and around the globe, Statix are pleased to welcome Alisik co-creator and artist, Helge Vogt, who is flying in from Germany for his very first U.S. convention appearance. Vogt will be appearing on the panel, then signing afterwards from 4 p.m. at the Titan booth #5537.