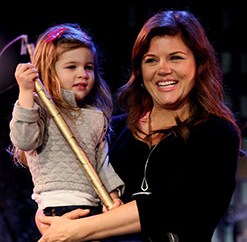 CARLSBAD– “Midnight” came early for families at Legoland California Resort celebrating the new year together without missing their bedtimes.

Thiessen, mother of one, is known for her role as Elizabeth Burke in the USA Network original series “White Collar,” and her past roles in popular TV shows, “Saved by the Bell” and “90210.”

“I’m thrilled to have my entire family included in Legoland California’s Kid’s New Year’s Eve Party,” said Thiessen. “We’ve made some amazing memories tonight that my daughter, Harper, and I will always remember.”

Music was rockin’ at Legoland California with featured musical artists The Pop-Ups, Secret Agent 23 Skidoo and Aaron Nigel Smith and the Fundamentals. More fun was had with performances by Latin Grammy winner Lucky Diaz and the Family Jam Band and Grammy nominee Justin Roberts and the Not Ready for Naptime Players. As a special treat, actor Lou Diamond Phillips joined in the fun and jumped on stage with Justin Roberts to perform “La Bamba.” 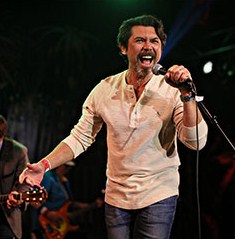 Families joined in the festivities decked out in party hats, glow-in-the-dark bracelets, and special glasses for viewing fireworks. The party concluded just in time for actress Tiffani Thiessen and her family to lead the countdown at 6 p.m. with an impressive fireworks display illuminating the family theme park and providing a great ending to an amazing year.