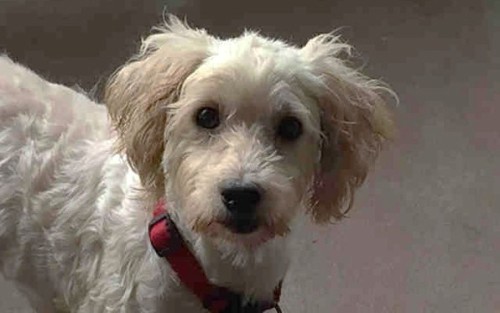 A maltese is one of many dogs seized by County Animal Services officers at a home in San Diego.

SAN DIEGO–More than three dozen dogs are now under the care of County Animal Services after they were removed from a home in Encanto over the weekend.

Animal control officers received a complaint about multiple dogs at a home on Skyline Drive. When the officers arrived, they could smell feces and urine from outside the residence. The owner agreed to relinquish 44 Maltese and mixed-breed Maltese dogs to the department.

Only six adult dogs are allowed on a property so the owner will be charged with operating an illegal dog kennel. Animal Services says the owner, Matthew Fitch, had been selling the dogs under the name Flor Fitch Puppy Sales.

“This is a backyard breeder who was more concerned about making money than providing the necessary care for the animals on the property,” said County Animal Services Deputy Director Dan DeSousa. “Our animal control officers observed cages with numerous small dogs in them, preventing the dogs from being able to move freely.”

The owner brought several dogs to the animal care facility in Bonita on Saturday and an additional 32 dogs were removed from the property by Animal Control Officers on Sunday. The owner was permitted to keep three dogs and Animal Services is coordinating with an animal welfare organization to get those dogs spayed and neutered.

The owner requested that several dogs be euthanized because of aggression. Most of the remaining 39 dogs have minor medical issues such as hair loss and lack of grooming but are being cared for at the department’s animal care facility in Bonita. Most of them are about one year old although some are up to 8 years old.

None of the dogs was spayed or neutered, so Animal Services is working to schedule those surgeries as quickly as possible. The department is also getting the dogs groomed.

Since the owner relinquished the dogs to Animal Services, there is no holding period and the animals are now available for adoption. For more information, call (619) 767- 2675, or visit sddac.com.