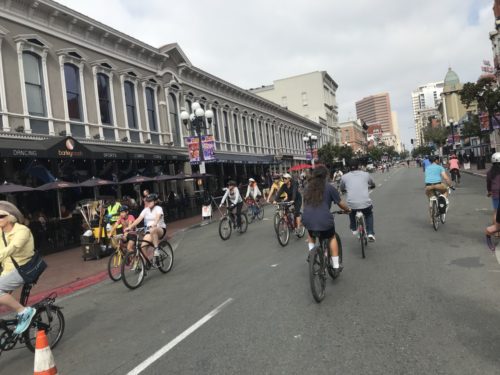 SAN DIEGO–On October 21, the San Diego Bike Coalition will bring its open-streets celebration back to the beach with CiclOBias Ocean Beach.

“We wanted to bring this year’s open-streets event back to the beach in an area abundant with local shops and restaurants,” says Bike Coalition Executive Director Andy Hanshaw. “CiclOBias will allow people of all ages to explore all that Ocean Beach’s vibrant beach community has to offer from a completely new standpoint.”

From 10 a.m. to 3 p.m. on October 21, select streets in Ocean Beach will close to cars to allow people to participate in a variety of family-friendly activities and re-experience the charm of the neighborhood from outside a car. The CiclOBias route begins at Voltaire St. and expands through Bacon St. with access to Santa Monica Ave. and Newport Ave.

Since the first open-streets event, CicloSDias, rolled through North Park streets in 2013, the Bike Coalition has engaged community partners, city officials, local businesses and neighbors to host five additional open-streets celebrations in beach and inland communities. CiclOBias is a partnership with the City of San Diego, the County of San Diego, the California Office of Traffic Safety, San Diego Police and the Ocean Beach Mainstreet Association.

The Bike Coalition encourages people of all ages to join for the free CiclOBias on October 21. For daily updates, roll along with the San Diego County Bike Coalition on Facebook and Twitter or at http://www.sdbikecoalition.org.