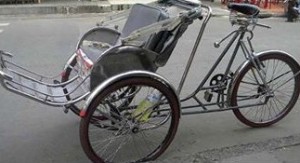 SAN DIEGO–Detectives are asking for the public’s assistance in the recovery of a stolen Cyclo bicycle owned by the Little Saigon Foundation.

Between January 28 to 29, the bicycle was stolen from the driveway of a residence at 3400 Central Avenue. The bicycle is worth approximately $2,000.00 dollars. It was shipped to the United States from Vietnam and stored in front of the residence for about one year.

San Diego police say the bicycle chain/lock was cut when the theft occurred. The bicycle is a cultural art piece and was to be exhibited at the Lunar New Year festival at Qualcomm Stadium.

The bicycle is solid blue and has a green canopy over the front seat. The front seat is also green.