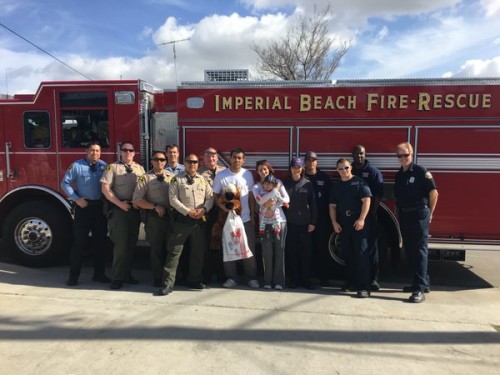 Francisco Garcia, his wife and their one year-old son just moved to Imperial Beach from Texas. Garcia is in the U.S. Army. A thief stole the family’s pickup truck and trailer that were filled with all of their belongings along Florida Street. Among the items stolen were Christmas gifts for the family’s son.

The theft was reported just before 9 a.m. When deputies responded to the scene of the crime, they knew they had to do something to help out the Garcias. Deputies joined forces with Sheriff’s detectives and professional staff, as well as the Imperial Beach Fire Department and Imperial Beach Fire Association. They quickly gathered up donations for the family, including cash, checks and gift cards from local stores.

The Garcias couldn’t believe their eyes when they were visited by the first responders with all of the donations.