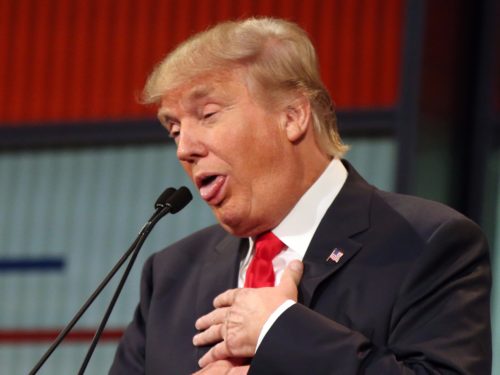 WASHINGTON – Schism, bitterness, demands for violent solution, disenchantment with the way things are, fear of what may be–these are the forces, some would say the demons, which are loose in the U.S. in the 2016 presidential race being led by Republican nominee Donald Trump. The demons accompanies the Republicans in this November’s congressional races poses a serious threat that the House and Senate may go to the Democrats. A deeply divided Republican Party exist today amid paroxysms of deep anxieties in the ranks that their nominee is a terribly flawed man who National Review Editor Bill Kristol describes as a “disaster for the Republican Party that will takes us all straight through hell.”

A bitter and irrational Trump rejected all signs of a rational argument for a peaceful transition of power if he loses on November 8 – instead he doubled down on his October 19 Las Vegas poor presidential debate performance; and repeated his announcement that he will not concede an imminent defeat because the way he sees it – the election is rigged against him.

This stunning revelation traumatically translated into panic among Republicans establishment officials, and the possibility we may see street battles between angry Trump protesters and police if in fact — as widely is predicted – Trump is expected to lose big time. Republicans and Democrats have been vocal condemning the conduct of Trump and his inability to expand from his angry base of supporters to a competitive race worth talking about.

The images of Trump in Las Vegas will haunt the Republicans for the duration of this election cycle and for years to come. Even if they can hang together through November 8, large groups within the party remain deeply and ideologically disaffected. Facing a confident and smoothly organized Democratic Party with Hillary Clinton at the helm, the Republicans must shoulder the voters’ discontent with their incumbents.

Despite the obviously gloomy prospects for Trump, the outcome at the stockyards was not totally grim for the Republicans. House Speaker Paul Ryan, desperately appealing for party unity, made what on the whole must be considered a last ditch attempt to save the House from what he calls a “hostile takeover by the Democrats.” Senate Majority Leader Mitch McConnell on the hand has his hands full trying to hang on to the Senate.

The two parties’ political convention may have picked two candidates opposed by a big segment of their respective parties and backed by an alliance of old-line political bosses in the Democratic Party, and widely rejected by the big wigs in the Republican Party, Trump is left to fend for himself. It is regrettable, perhaps, that the American political system did not cast up two more modern and exciting candidates than Trump and Clinton. But as we all know in politics – money rules and without it – you don’t win. But the decision in Cleveland, as in Philadelphia, does in a rough sort of way reflect the way candidates are chosen and vetted. Despite the deep disillusionment of many Americans with the Old Politics, the majority seems to have no strong appetite for radical solutions, except in Trump’s case.

None of this mattered much to some of Trump’s disappointed Republican Party leaders, and their leader’s stubborn and unorthodox refusal to endorse or change his bombastic style of campaigning, fed their bitterness toward him. For the most adamant in this group, the only hope was to organize a new party, even if it meant a Democratic victory for Clinton and company.  Other Republicans who have been fighting the “party establishment” realize that whatever their differences with Trump, they prefer him to anyone else because they feel he can bring meaningful change to Washington. Despite all the talk about Tweedledum and Tweedledee among the disenchanted, real distinctions exist between Trump and the Paul Ryans, which will not go away after the election.