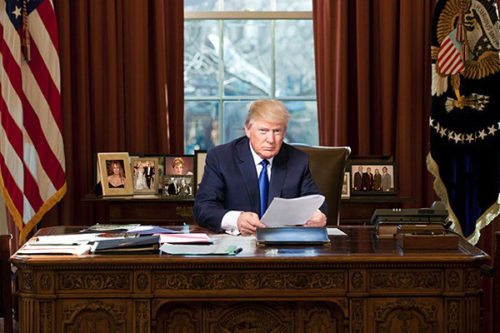 Photo courtesy of the White House.

WASHINGTON, DC – Even as they demonstrated in the streets of America’s largest cities in massive numbers, the progressive and liberal establishment are desperately trying to keep up with what they perceive as President Donald Trump’s and the Republicans “hostile takeover of America.”  As the stampede of Republicans elephants roam the Washington, DC political scene, Americans really have had no way of knowing just where Trump intended to lead them.

A complete novice in politics, but a master of publicity and optics, Trump’s focus has always been on domination of everything he is involved with; he remained one of the most unpredictable and ineluctable men in public life. The on and off again politician who had always been off and running toward the next big publicity story had won the ultimate victory. But why stop now with so much riding on his presidency and image. What would he do with his triumph going forward?

The past was not illuminating. Trump had reversed himself too often as circumstances dictated or opportunities beckoned. But unlike other conventional politicians, Trump’s shrewdly protective campaign had concentrated far more upon what he would do than on what he expected not to do. Yet there he was, the spoil rich real estate mogul from New York, so often seen as insecure and introspective, so often tormented by self- proclaimed crises and ridiculed by scoffing critics, now vindicated by the only standard a democratic leader and professional politician appreciates: an overwhelming victory at the polls. He held unchallengeable control of the Executive Branch and both chambers of Congress, and had been handed a rare chance to shape the nation’s future in his own fashion.

The fact that Trump need no longer worry about appealing to masses of voters was either scary or hopeful, depending upon the angle of view. Having lost the popular vote due to what he called “illegal voting irregularities,” radicals and some liberals professed to have nightmares of an “unleashed” Trump, finally free to throw dissenters into jails and to nuke North Korea if it did not knuckle under. Conservatives held visions of a sturdy figure checking the tide of permissiveness, defending the work ethic against welfare loafers and Muslims extremists.

Actually, all of those prophecies may well miss the mark. After studying the past campaign period and his successful take down of the Democratic Party and the Clinton machine, San Diego County News has concluded that Trump would now attempt to carve out a program of domestic and international achievements that will be focused on renewed ties with Russia, containing Iran and North Korea, expand America’s oil and natural gas exports, build the Wall and wage an all-out assault on the destruction of Isis. The domestic agenda will consist of reassuring the American people of his commitment to keep jobs in America, roll back regulations, reform the tax codes, get rid of ObamaCare and replace it with TrumpCare, denigrate the Democrats and the liberals whenever possible, and control the mass media by waging an anti-media propaganda operation headed by Steve Bannon and company.

Relying on civic-minded citizens to resolve social problems through the lowest levels of government is, of course, sweet-sounding democratic theory. Indeed, one innovation in Trump’s “America First” revolution is this goal of localizing some responsibilities, which fits perfectly with the Republican Congress agenda and the Christian evangelical constituencies. Trump and the Republicans will enact measures to promote that shift through general revenue sharing, under which some $100 billion of Federal tax money will be reverted to states and cities this year for them to spend as they see fit. Spread thinly everywhere, including suburbia (where it will often be used to reduce local taxes), this will not provide the resources for any sizable community to meet such needs as better mass transportation, improved housing, nonpolluting waste disposal, and better schools. Trump is expected to press for Congressional approval of “special” revenue sharing, targeted at easing specific problems, but apparently this would supplant the larger Federal grants already serving similar purposes.

Yet Trump and his White House inner circle predict that his localized approach would be attacked as “a retreat from Federal responsibilities,” they are right–because to a large extent, it is. Washington stepped into many of the social programs it has launched precisely because states and cities had been unwilling or unable to handle them as was evidenced by the hostile reaction to the ObamaCare roll out and implementation. Many Republicans feel that the lingering Great Society programs (Medicare, Social Security) have indeed proved to be ineffective or wasteful and need to be weeded out; most of the ills they were meant to remedy have grown worse.

But the nation’s states and cities, many of them impoverished, are even less equipped to deal with impoverished social ills of the inner cities because of shifting priorities. It is naive to expect that without outside pressure a city dependent upon a mining industry will, for example, check pollution, or a racially divided community will integrate its schools. The lowest common denominator is often local prejudice. Even many liberals, on the other hand, have been shaken in their traditional faith in Federal intervention as an effective agent in dealing with a range of social problems, and the Republicans’ approach evidently is in tune with the majority of Republican present temper.

Trump’s coming domestic strategy of praise of decentralization is also intended to make a virtue out of what he considers a necessity. Given his Administration’s continued commitment to high defense spending and opposition to higher taxes, there is no money available for new or expanded social services. Trump is an advocate of more Federal spending and not fiscal prudence, will undoubtedly be in conflict with the House Speaker Paul Ryan and Senate Majority Leader Mitch McConnell. Although the fault is not entirely Trump’s, he heads into his first 90 days in office confined by a fiscal squeeze that will sharply delimit domestic policy. So far he has issued no major requests for new initiatives from his departments, which are still in infant stages, to make good on the jobs and tax cuts promises he made. Indeed, only one instruction has gone out: prepare to tighten your belts – the nation is in for a wild rollercoaster ride.