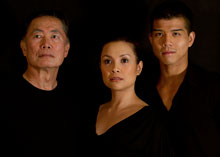 From left, George Takei will star as Sam Kimura and Ojii-san, Lea Salonga as Kei Kimura and Hana Suzuki and Telly Leung as Sammy Kimura in Allegiance – A New American Musical.

SAN DIEGO–The Old Globe will present artist Wendy Maruyama’s large-scale sculptural installation “The Tag Project” in conjunction with the world premiere of Allegiance – A New American Musical, which will run on the Donald and Darlene Shiley Stage in the Old Globe Theatre, part of the Globe’s Conrad Prebys Theatre Center.

“The Tag Project” memorializes the nearly 120,000 Japanese Americans who were imprisoned in U.S. internment camps during World War II. The project consists of 10 groupings of replicas of the historic identification labels issued to every internee, including their name, number and the camp to which they were relocated. Three of the groupings will be hung in the upper lobby of the Old Globe Theatre during the run of Allegiance from Sept. 7 to Oct. 21.

The musical tells the story of one Japanese American family’s struggles during the internment and stars television and film icon George Takei, who was imprisoned in the Camp Rohwer and Camp Tule Lake internment camps as a child.

Wendy Maruyama is an artist and educator from San Diego and has been making furniture and art since 1970. Her work is often inspired by extended residencies and visits to various countries such as France, England, Japan, Korea and China. In the past 15 years her work has taken on stylistic influences from Asia.

Born in La Junta, Colorado, to second-generation Japanese American parents, she made several pilgrimages to the land of her heritage, Japan. At times reverent of Japan’s craft history and advanced technology, and appalled by Japan’s self-indulgent, materialistic and almost faceless and patriarchal society, she vacillates between creating works that both emulate and satirize contemporary Japan. Her newest works, “The Tag Project” and “Executive Order 9066,” are hitting closer to home—the works are influenced by personal and family history and addresses the internment of Japanese Americans in 1942.

Allegiance – A New Amerian Musical is an epic story of family, love and patriotism set during the Japanese American internment of World War II. On the 60th anniversary of Pearl Harbor, a meeting with a young journalist forces WWII veteran Sam Kimura to remember his family’s relocation from their California farm to the Heart Mountain internment camp. As they struggle to adjust to their new home, Young Sam and his sister Kei find themselves torn between loyalty to their family and allegiance to their country. With its moving score, Allegiance takes audiences on a journey into our nation’s history through the eyes of one American family.

Admittance to the exhibition is included in the ticket price to Allegiance. Tickets can be purchased online at www.TheOldGlobe.org, by phone at (619) 23-GLOBE, or by visiting the Box Office at 1363 Old Globe Way in Balboa Park.