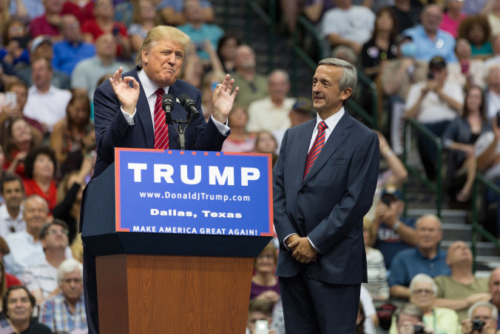 WASHINGTON – According to a recent Washington Post article, over the past 5 years, white evangelicals have become much more likely to say a person who commits an “immoral” act can behave ethically in a public role. In 2011, just 30 percent of these evangelicals said this, but that number has more than doubled to 72 percent in a recent survey. The survey comes as the majority of white evangelicals are expected to favor Republican presidential candidate Donald Trump, a thrice-married business executive who has bragged about having sex with multiple married women. The new poll published October 19 by Public Religion Research Institute suggested that evangelicals support Trump over Democratic presidential candidate Hillary Clinton by 69 to 15 percent. As a voting bloc, white evangelicals have been some of Trump’s strongest supporters this election cycle, though evangelical leaders have been divided on his candidacy.

After a video was published earlier this month by The Washington Post that included lewd comments from Trump, some evangelicals, like James Dobson, Jerry Falwell Jr. and Eric Metaxas, continued to back the Republican candidate while others, including editors at Christianity Today and World magazines and Russell Moore of the Southern Baptist Convention, denounced him.

But after he denounced Trump’s video and renounced his earlier column supporting Trump, theologian Wayne Grudem on Wednesday published a lengthy defense of why he thinks evangelicals should vote for Trump. In his new column, he addresses adultery, or Trump’s sex with women outside his marriage.

Recent polling from The Post suggested that Trump’s support from evangelical voters remains strong despite the contents of the video in which Trump bragged about kissing, groping and trying to have sex with women.

Some evangelicals like Ralph Reed have in the past called for the importance of character from political leaders. In 1998, he called President Bill Clinton’s Monica Lewinsky scandal “the ultimate evidence that Washington was in need of a restoration of ‘family values.’ ” After the video was published, Reed said he was disappointed but that voters will want to vote on the issues that matter to them.

White, non-Hispanic Christians have leaned Republican since President Ronald Reagan’s time, said Robert P. Jones, head of PRRI. Everyone else, he said, including nonwhite Christians, nonwhite religious groups that are not Christian and the religiously unaffiliated have leaned Democratic.

The Religious Right Trump Brigade are Deceived and Disillusioned 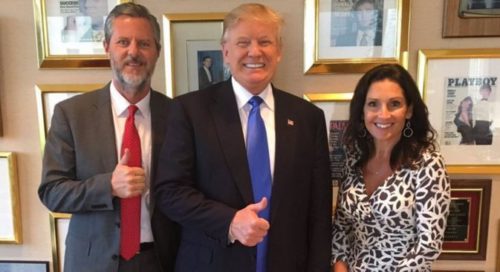 The Rev. Jerry Falwell, Jr. and his wife Becki, are under fire from many white evangelicals who have harshly criticized him for his unwavering support for Donald Trump.  Picture Courtesy of the Jerry Falwell Ministries

The Monday after America heard Trump’s vulgar boasting, Ralph Reed, the political strategist thought to have a genius for turning out evangelical voters, delivered a full-throated defense of why Christians should vote for the nominee to students at Liberty University. That same day, Mark DeMoss, a highly regarded Christian public relations professional who, in the 1980s, was the chief of staff to Liberty’s founder, Jerry Falwell Sr., told the New York Times, “The evangelical movement has, in my view, forfeited any future moral authority in American public life.” Mr. DeMoss, himself a Liberty alumnus, was asked to resign from the university board’s executive committee in February after he was publicly critical of the endorsement of Trump by Liberty’s president, Jerry Falwell Jr.

That was just the beginning of what has become an evangelical schism over Trump. This month, Wayne Grudem, a theologian highly respected by evangelicals, rescinded his endorsement. Andy Crouch, executive editor of Christianity Today, wrote, “Enthusiasm for a candidate like Trump gives our neighbors ample reason to doubt that we believe Jesus is Lord.” James MacDonald, a pastor who had agreed to serve on Trump’s Evangelical Executive Advisory Council, called Trump “lecherous and worthless” and the council “a joke.”

Mr. Falwell, though, has stood by Trump, telling WABC Radio that “we’re all sinners” and accusing “Republican establishment members” of a conspiracy to release the tape so they could “slither out” of their endorsements. Yet the reaction of a group of Liberty students provided another data point in the unfolding evangelical power collapse. The students released a letter declaring that Trump “is absolutely opposed to what we believe, and does not have our support.”

Although its leaders may not admit it, the political apparatus of the religious right that has persisted in supporting Trump’s candidacy is driven by a quest to retain a seat at a potential Republican White House table.

But capitulating to Trump has stripped those leaders of their leverage. In previous elections, they vetted the candidates, dangling the indispensable evangelical vote in exchange for promises about Supreme Court justices and dedication to “Christian values.” Trump reversed that dynamic. He has offered the most perfunctory promises of Supreme Court nominations and “pro-life” principles, but rarely talks about their major issues, particularly religious freedom. His most Trumpian promise is his pledge to repeal the Johnson Amendment, a rarely enforced law that bars houses of worship and other nonprofit groups from using tax-exempt resources to endorse political candidates.

For evangelical leaders who are backing Trump, even a good-news scenario — the surveys are wrong and he wins — carries risk. Trump could fail to follow through on his promises to the religious right, the leaders who endorsed him will suffer diminished standing and their organizations could face difficulties in fund-raising. If he loses, though, there could be a showdown in which the pro-Trump camp blames the anti-Trumpers for the loss, and the anti-Trump camp is still seething that it was asked to compromise principles for party loyalty.

“It will take a long time,” Jerushah Armfield, an evangelical writer and the granddaughter of the iconic evangelist Billy Graham, told me, “for evangelicals to redeem their moral credibility — if they even can.”

There remains one thing that could still unite conservative evangelicals: a Hillary Clinton presidency. It’s still entirely foreseeable that the religious right, along with other pro-Trump partisans, would fight Mrs. Clinton’s legislative agenda, her Supreme Court nominees and even the legitimacy of her election. A recent poll showed that 68 percent of white evangelicals found Trump’s call to jail Mrs. Clinton “appropriate.” Antipathy for Mrs. Clinton runs deep: In 1994, Mr. Falwell Sr. helped foment the Bill Clinton impeachment fight, marketing a film that accused Mr. Clinton of sexual misdeeds and even murder. Back then, Mr. Falwell sold the videotapes for $43 each. Today, conspiracy theories proliferate freely on the internet.

By hitching their wagon to Trump, religious-right leaders are also tying their fortunes to the alt-right, the predominant movement supportive of, and bolstered by, the Trump campaign. As a largely secular movement, though, the alt-right not only is uninterested in the religious right’s concerns, it also threatens to eclipse the religious right within the Republican Party. And it’s a movement simmering with racism, xenophobia and anti-Semitism.

The religious right has told us for decades that the moral downfall of America is imminent, and only God can save us. It may finally be proven right.