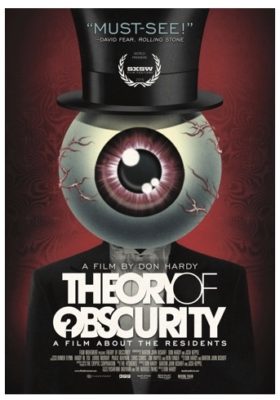 SAN DIEGO– Iconic avant-garde art rock collective The Residents present their latest live show Shadowland and a special pre-concert screening of the documentary, “Theory of Obscurity: A Film About The Residents,” which takes viewers on a journey through their 40 plus-year career, during an extensive North American tour May 2016.

“Theory of Obscurity” tells the mystifying story of the eccentric sound and video group The Residents, who for more than four decades pioneered multimedia platforms while rising to cult status amongst music fans and renowned artists alike. The Residents’ management company, The Cryptic Corporation, granted director Don Hardy and his crew unprecedented access to the group’s archives and latest world tour. Theory of Obscurity features interviews with Matt Groening (The Simpsons), Penn Jillette (Penn and Teller), Les Claypool (Primus), Mickey Melchiondo, Jr (Ween) and others discussing their obsession with The Residents.

For more than four decades, The Residents have astonishingly remained anonymous, with many details surrounding the band shrouded in secrecy (the band always performs wearing masks and costumes, which is part of their undeniable magic). Don Hardy and his team take viewers for an inside-look into what many industry leaders have touted as “the best experimental art band of all time.” The Residents have released a staggering 60+ albums and spearheaded home recording, video production, animation, CD-Rom, laserdisc, podcasts and web-series. Their short films were in heavy rotation during MTV’s early days and they are now part of the Museum of Modern Art’s (NYC) permanent collection.

“The amount of material The Residents have turned out of the past four decades is truly amazing. When my partners Barton Bishoff, Josh Keppel and I dug into the vaults beneath The Cryptic Corporation we were blown away to see all of their audio recordings, film projects, and other multimedia endeavors laid out in front of us. And they’re not done, The Residents are still out there staging dynamic shows and creating new music. They’re work ethic inspires us and our hope is their story will inspire others to be weird, take chances, and follow their own unique voices.”

Theory of Obscurity reveals the heart and soul of The Residents — a band that’s never caved to convention or compromised artistic integrity in the pursuit of achieving their dreams. Through the ups and downs of a prolific band following their creative muse, the film takes fans along for a wild ride spanning the complete career of one of the few artists remaining relevant after 40 years.

“Piercing the veil of the world’s most famous unknown band,” says Homer Flynn, Vice President of The Cryptic Corporation, “director Don Hardy has created an extraordinary and intimate look into the lives of this mysterious group. Supported by more than 40 interviews from those within the band’s inner circle, the film exposes the depth and influence of The Residents with the immediacy of the documentary format. In addition to the film, The Residents will present their new show Shadowland directly following the screening each night on the spring 2016 tour. The combination of the film and live performance will create a once-in-a-lifetime opportunity to experience The Residents as never before.”

The Residents are as elusive as it gets, with ambiguity being a centerpiece of their acclaimed work. For the band’s latest trilogy of tours, the members reinvented themselves as Randy, Chuck and Bob, the world’s greatest Residents’ cover band. To conclude the celebration of their 40th Anniversary, The Residents present Shadowland in more than 20 North American cities (Part 3 of the Randy, Chuck and Bob Trilogy). Aspiring to examine life in reverse, the trilogy commenced with The Talking Light (2010), a study of ghosts and death; reflecting on love and sex, the group continued with their Wonder of Weird tour (2013); and finally with Shadowland, Randy, Chuck and Bob will focus on the beginning of life – birth. As with Parts 1 and 2 of the trilogy, Part 3 will feature music from The Residents’ extensive catalog interspersed with short videos about birth, rebirth, reincarnation and NDEs (near death experiences).